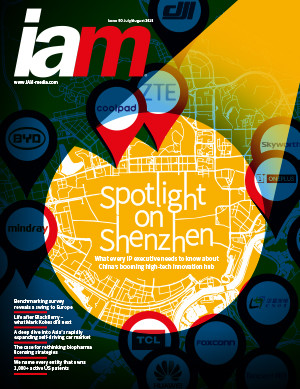 The southern city of Shenzhen and its surrounding environs are China’s Silicon Valley. For global patent market players, knowledge of this region is a must

The southern city of Shenzhen and its surrounding environs are China’s Silicon Valley. For global patent market players, knowledge of this region is a must
Jacob Schindler and Bing Zhao

Does the United States have the national strategy and infrastructure to establish a technological lead?

Re-establishing the quality, strength and predictability of the US patent system would make a major contribution to ensuring the nation’s leadership in a wide number of technology areas
Sam Khoury, Corrine Sukiennik and Jason Lye

The entities with portfolios of 1,000 or more US patents

Between them, the 346 entities named in the IAM/ktMINE US Patent 1,000 Club hold close to 50% of all active US patents

There are many tools designed to help IP owners in the value creation process, but selecting the right ones can be a tough task. Considering the key issues can help to simplify the process
Martin Bijman

Mark Kokes quit as BlackBerry’s IP head last year to go to work at a sprawling conglomerate owned by one of California’s richest men. Charged with monetising a huge, disparate portfolio, this new role could be his biggest challenge yet
Richard Lloyd

Businesses that want to maximise the value of their intellectual property must understand it will not just happen overnight. Instead, they must put in place proactive plans to manage the process – and that means starting even before patent applications are filed
Johanna Dwyer, Paul Carpenter and Daniela Sanchez

China stakes its claim in the self-driving race for success

Self-driving car sales are expected to hit 21 million by 2035. No surprise then that both traditional car makers and leading technology companies are vying to be the first to release a fully autonomous vehicle
Gaurav Agnihotri

Europe enjoys a patent renaissance, despite Brexit and UPC uncertainty

With close to 900 responses, the 2018 IAM benchmarking survey is the biggest we have carried out yet. The results reveal an IP market that is more international than ever before, but which has still to fully recover its mojo
Adam Houldsworth and Tim Au

The case for licensing biopharma patents after loss of exclusivity

Challenging the common misconception that patent protection is too complex and costly for small and medium-sized enterprises, recent European Patent Office case studies reveal that such companies are building success through their IP strategies

Intangible investor: US innovation policy: time for a makeover

Iwncomm v Sony broke new ground in granting injunctive relief to a Chinese plaintiff. In confirming the decision, the Beijing High Court has staked out some interesting positions on exhaustion and contributory infringement

Is SEP licensing up to standard?

The landscape around SEP licensing has changed considerably in recent years thanks in large part to key court decisions. As courts and regulators around the world continue to frame the debate around SEPs, there is much for patent owners to consider

No one expected the Supreme Court to turn the US patent system upside down with Oil States – and it did not. But its SAS judgment issued on the same day could mean some big post-grant changes. Meanwhile, Andrei Iancu is exhibiting pro-patent inclinations