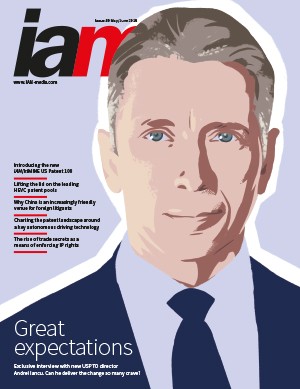 Andrei Iancu finally began his stint as US Patent and Trademark Office director in February and sat down with IAM for his first interview shortly after. With the US patent system still in considerable flux, he faces one of the most daunting tasks in the IP world today

How do foreign parties really fare in Chinese patent litigation?

An exclusive analysis of patent litigation statistics from across the whole of China in 2016 reveals that contrary to popular belief, foreign parties are doing extremely well in both infringement and validity battles
Jacqueline Lui and Libin Jin

Samsung leads the way in the US patent portfolio stakes, followed by IBM and Canon

IAM and ktMINE have joined forces to create the IAM/ktMINE US Patent 100 – a list of the 100 entities with the biggest active US patent portfolios. Although US companies make up most of this year’s group, Asian companies hold most of the patents

Andrei Iancu finally began his stint as US Patent and Trademark Office director in February and sat down with IAM for his first interview shortly after. With the US patent system still in considerable flux, he faces one of the most daunting tasks in the IP world today

The organisational keys to unlocking your IP value potential

The operating model is the key factor that separates the best from the rest when it comes to using intellectual property to establish and leverage competitive advantages. Operating models have four pillars, which can prove key differentiators

Who owns the future of autonomous vehicles?

LiDAR has emerged as a foundational technology in the race to develop self-driving cars. Whoever owns the relevant intellectual property in this area looks set to have a significant edge in the new sector

Beyond the hype: a practical guide to navigating AI for intellectual property

Artificial intelligence, machine learning and deep learning are touted by many and understood by few. But their impact on the practice of IP management and the patent system itself will be major

What will TV cost you? Putting a price on HEVC licences

Changes in how you watch movies, stream TV and use video chat are on the way. These will fundamentally affect the economics of how content is delivered to you, as well as the way that the patents underpinning the enabling technology are licensed
Kent Richardson and Erik Oliver

Political rhetoric has thrust trade secrets misappropriation into the spotlight. New legislation around the world means that rights holders have never had more options for enforcing their rights.
Jacob Schindler

An order from the Middle District of Florida may mean that petitioners have to foot the bill for America Invents Act proceedings, even if the prevailing party has a colourable argument for finding the case exceptional

Intangible investor: Identifying the IP impact of the US tax act

A deal for our times