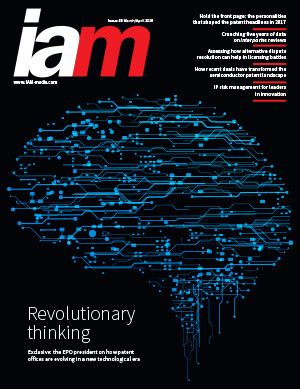 Patents and the fourth industrial revolution

The fourth industrial revolution promises to have a profound effect on almost every economic sector. Patent offices around the world must evolve to keep pace with the rate of change.

Government bodies in Asia and beyond say that alternative dispute resolution is underutilised in disputes over fair, reasonable and non-discriminatory licences. However, parties on both sides argue that it is far from a cure-all
Jacob Schindler

Intellectual property and artificial intelligence: what does the future hold?

Artificial intelligence is creating a seismic shift in the way that people interact with technology. Research institutions and for-profit companies are moving to patent the commercial aspects of this new area in a land grab which could see rights holders reap future benefits
Peter Cowan and Jim Hinton

Trends in semiconductor patent transaction activity from 2013 to 2017

Upheavals in the semiconductor industry have seen patents change hands at unprecedented rates. This activity means that the IP landscape now looks very different to how it did five years ago
Kim Waterman and Martin Bijman

The long and the short of it

Matt Stack has spent much of his investment career developing a keen understanding of just how valuable intellectual property can be to a company. But as patents become far less enticing, he has shifted his focus to a new and very different kind of intangible asset

How to succeed at every stage of an inter partes review

Inter partes reviews continue to have a huge impact on patent litigation in the United States. Understanding the best routes to success at each stage of a review is crucial for petitioners and patent owners alike

The IP personalities of 2017

Identifying and mitigating IP risk needs to be part of any corporate strategy. To this end, Tata Consultancy Services has developed a robust framework that can be applied across industries
Shekhar Guha and Parthapratim Indra

If we fail to protect intellectual property, we destroy innovation

A narrative that intellectual property is a damaging force is becoming widespread in the media and among policy makers. If it is not countered creatively – and urgently – society as a whole, not just rights holders, will pay a heavy price
Giustino de Sanctis

Patents and the fourth industrial revolution

The fourth industrial revolution promises to have a profound effect on almost every economic sector. Patent offices around the world must evolve to keep pace with the rate of change.
Benoît Battistelli

A new regulatory mechanism in Taiwan should be a boon to branded pharmaceuticals, although innovative companies did not get quite everything they wanted

Modelling tools from the world of finance can be deployed to help inform IP decision makers, with their applications extending well beyond outright monetisation campaigns

A controversial study finds that economic hardship and lack of exposure to innovation are preventing people from some ethnic minorities, low-income backgrounds and women from becoming inventors