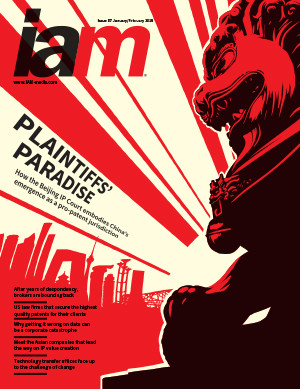 Beijing stakes its claim as a litigation capital

The introduction of specialised IP courts has ushered in a new era in Chinese patent litigation. Recent statistics from the Beijing IP Court lift the veil on an enticing jurisdiction for patent owners

Beijing stakes its claim as a litigation capital

The introduction of specialised IP courts has ushered in a new era in Chinese patent litigation. Recent statistics from the Beijing IP Court lift the veil on an enticing jurisdiction for patent owners

Whisper it softly but the signs first glimpsed in 2016 are becoming stronger – the brokered patent market in the United States may just be in the first stages of a recovery
Michael Costa, Kent Richardson and Erik Oliver

Illuminating the dark side of patent data

Patent data can be a powerful tool and rights holders today have more access to it than ever before. However, used incorrectly, it can lead them to adopt strategies that are less than sound
Leon Hsu, YP Jou, Hua Chen and Steven Reiss

The finance of IP litigation

As contingency arrangements in US patent cases become rarer, litigation financing options are attracting more interest. With so many choices available, those exploring opportunities have much to understand
Fatih Ozluturk

Patent quality through the long lens

The US law firms featuring in the annual Ocean Tomo/IAM rankings, which identify who prosecutes the highest quality patents at the US Patent and Trademark Office, have had to rethink many of their approaches in the wake of recent changes to the US patent landscape
Kristi Stathis, Saadia Saifuddin and Molly Keelan

For US lawyers, the patent party is most definitely over

Patent litigation in the United States has been transformed over the last decade, but as new data shows the average cost of a case falling precipitously, patent lawyers are facing up to a very different reality

The rising number of companies in IAM’s Asia IP Elite group is testament to Asia’s growing interest in IP value creation. All were honoured at a special dinner during IPBC Asia in Tokyo, with a select few receiving awards for their achievements over the past year

IPBC Asia 2017 took place at the Palace Hotel in Tokyo from October 29 to 31. Over 530 delegates – a new record – were in attendance, contributing to what was a fascinating and insightful three days. Issues such as IP strategy in the age of convergence and the state of the global patent transactions market were central themes, with the perspective of senior IP leaders from the region forming the basis of discussions. By the end one thing had become abundantly clear: change is in the air and Asia is at the heart of the developing world of intellectual property
Jacob Schindler, Joff Wild and Richard Lloyd

The future of technology transfer

Universities and other non-profit research institutions play a vital role in the US innovation economy, and are key to institutions realising value from their discoveries. But as both technology and the IP landscape grow increasingly complex, they face steep challenges

Tech transfer in China: common mistakes and how to avoid them

The road to success is seldom straightforward when it comes to China technology deals. Having a thorough understanding of China’s innovation policies, technology import regulations and antitrust laws is crucial when it comes to avoiding missteps
Jiwen Chen

Going global is the new mantra in the patent transactions market

@IAM_magazine RT @IAM_magazine: This week's IAM Sunday Supplement has now been published, rounding up all the news, data, analysis and opinion from the g… Read more