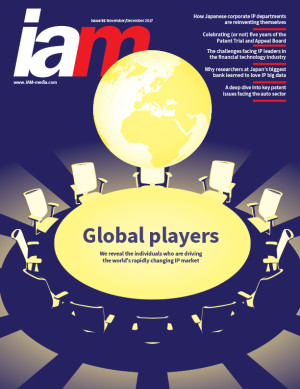 Top players of the global game

The fourth annual IAM Market Makers listing reflects an environment which is becoming more focused on operating companies and increasingly international. Those named in this year’s top 40 are striking more innovative deals across more industries than ever before

There are two major technical factors to consider when conducting assertive licensing of wireless communications: commercial use of the patented technology and ability to show infringement. The lack of either of these can prove a critical barrier to successful licensing
Marc Pépin

The future of mobility – can patents keep up?

The automotive sector is experiencing significant disruption. In order to succeed, the incumbent car manufacturers, their suppliers and new entrants need to consider how this transformation will change their view of patents
Nigel Swycher and Steve Harris

Is the Internet of Automobiles the next big thing?

The auto sector and its underlying technology are changing rapidly. As the patent landscape also transforms, it is increasingly important to keep tabs on how the car giants, key suppliers and new entrants boost their IP portfolios
Vijaya Krishna, Murari Venkataraman and George Koomullil

The problems with the PTAB

Regulatory reforms and technological disruption are transforming the research functions within major financial institutions. Now Japan’s biggest bank is attempting to harness IP big data to give it an inside edge on equity analysis
Kunihiko Shiohara and Tatsuo Nakamura

The PTAB at five: reduced leverage for NPEs

The Patent Trial and Appeal Board celebrated its fifth birthday in September and continues to provide an efficient and cost-effective way to challenge questionable patents. It has its critics – most notably, those who enriched themselves under the old system
Jonathan Stroud

A special panel of fintech IP practitioners got together in May to discuss the challenges and opportunities they face. As this special report reveals, there are plenty of both
Michael V Young, Sr, Elliot Cook and Jeffrey A Berkowitz

Top players of the global game

The fourth annual IAM Market Makers listing reflects an environment which is becoming more focused on operating companies and increasingly international. Those named in this year’s top 40 are striking more innovative deals across more industries than ever before

Amid dramatic industrial changes, Japanese companies have the chance to take a major leap forward and deploy IP activities to greater effect throughout enterprises. This will involve not only IP teams, but also management and business divisions
Naoto Kuji

As the automotive and technology industries collide, prominent original equipment manufacturers risk being overtaken by tech-savvy new entrants and their own suppliers, unless they proactively change their IP strategies
Mark Gober, Michael Poppler, Peter Detkin and Kevin Rivette

The Supreme Court of Canada has struck down the so-called ‘promise doctrine’, which should make it easier for patents to clear the utility bar. However, there are fears that litigants will use other avenues to challenge patent validity

Intangible investor: The premium on perception

How various audiences see IP rights, and why, is starting to receive the serious attention it deserves

Intellectual property can play an instrumental role in accelerating innovation within large global companies. By deploying carefully planned strategies, IP departments can support this process while raising their own profiles at the same time

Running the gamut from advanced high-tech economies to middle-income and developing countries, the Asia-Pacific region presents a diverse set of challenges and opportunities for patent owners. IAM has reached out to the most trusted patent firms across Asia to prepare a handy reference for chief IP officers

Trump hones in on China, but would do well to look closer to home

The Trump administration’s probe into Chinese IP practices that are allegedly harming US interests may be politically charged but is being welcomed by many tech companies. However, it may be US developments which are giving Chinese entities a helping hand