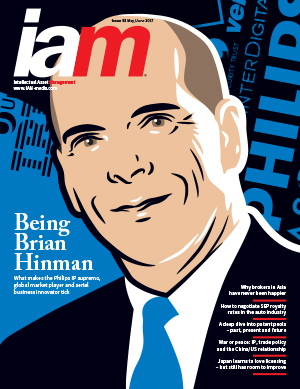 The game-changer who just wanted to fly

Former pilot Brian Hinman has run big corporate IP groups, monetised major patent portfolios and established ground-breaking businesses. Now chief IP officer at Philips, he has compelling views on the current state of the IP market and how it might develop

Patent pools have proliferated over the last 20 years, with varying degrees of success. Whether they can continue to solve some of the thorniest issues in the licensing market will determine their future

Patents and standards in the auto industry

The next steps for Japan’s licensing market

Last year, the Japanese licensing market showed a trend for increasingly creative and innovative IP deals. However, rather than congratulating themselves, executives should push for even more return on investment

The state of open source in Asia

While Japanese companies have doubled down on open source software collaboration, including in new areas such as auto, Chinese firms have been slower to embrace it, which risks isolating projects from a key emerging technology centre

Selling patents on the open market in the United States is getting more difficult and less lucrative. Over in Asia, though, local brokers are busier than ever

An insider’s guide to patent pools

While events outside the conventional IP world have conspired to raise the profile of trade secrets, neither corporations nor their legal advisers typically know how to handle them proactively

Embracing the power of patents

Based on different continents and very different in size, Microsoft and Fractus are united by a sophisticated understanding of IP value which is delivering tangible results. Others would be well advised to heed their example

The bitter patent war fought by Edison and Westinghouse for control of electricity is depicted in a best-selling novel, soon to be a major motion picture

View from the IP Hall of Fame: Design patent damages after Samsung – the quest for a fair standard

In the wake of the Supreme Court’s decision in Samsung v Apple, design patent owners are waiting for the lower courts to articulate a standard for awarding total profits on the sale of products protected by a patented design

Five years of the Patent Trial and Appeal Board

Since its establishment in 2012, the Patent Trial and Appeal Board has reshaped the US patent litigation landscape. Whether you think it is helping to improve patent quality or killing IP rights, there is no doubt that the changes have been profound