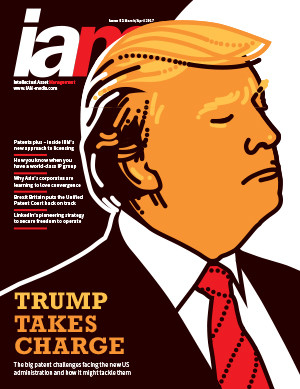 President Trump’s election victory was one of the biggest political shocks in US history. His new administration promises changes in many areas – but when it comes to patents, much of the thinking remains unknown

President Trump’s election victory was one of the biggest political shocks in US history. His new administration promises changes in many areas – but when it comes to patents, much of the thinking remains unknown
Richard Lloyd

Ensuring you are match fit to securitise your IP assets

IBM has always been at the forefront of IP value creation strategy, having pioneered the corporate patent monetisation programme back in the 1990s. Now it is making waves once again
Jack Ellis

The UPC springs back to life

The Unified Patent Court received an unexpected boost in November 2016, when the UK government committed to ratifying the agreement despite Brexit. Private practice experts from three leading European law firms discuss the implications

How and why LinkedIn learned to love patents

LinkedIn was a big brand name with a small patent portfolio – a combination that made it vulnerable to attack. In 2012 the company decided to do something about it. This is what happened next
Sara Harrington, Pierre Keeley, Kent Richardson and Erik Oliver

At IPBC Asia 2016 – which took place in Shanghai in December – delegates from countries around the world were left in no doubt that China is in the process of taking its seat at the top table of the global IP market
Jacob Schindler, Joff Wild and Richard Lloyd

The changing face of inter partes reviews: strategy for practitioners

The introduction of new post-issuance proceedings has had a profound impact on the US patent market. Corporate rights holders must strike a careful balance when considering the threats and opportunities presented by inter partes reviews
Amy Simpson and Gene Lee

It’s all coming together

For Asian tech corporates, convergence is presenting previously unknown legal risks and opportunities for collaboration. New entrants will have to be canny to survive in this increasingly complex business environment
Jacob Schindler

How you know when you have a world-class IP strategy

It is all very well having an IP strategy – but ensuring it has a real commercial impact is another matter. There are, though, steps you can take to ensure that you are doing the best possible job
Henrik Olsson

View from the IP Hall of Fame: The crisis for creators in the digital age

Copyright laws no longer offer sufficient protection to creators, whose only chance of success may be to find a patron of their work

IP strategist: Start-ups should always be preparing for due diligence

To boost the chances of raising capital or achieving a successful exit, start-ups should always be preparing for due diligence as part of their everyday IP processes

Intangible investor: When theft is no crime

IP abuse is widely accepted and dangerously viral. Slowing it will require increased awareness of the benefits of IP rights, as well as the dangers of so-called ‘innocent’ pilfering

IAM names its IP personalities of 2016

There is little doubt that last year was among the most momentous of recent times – in intellectual property as in so many other areas. That made choosing our IP personalities of 2016 a tough task