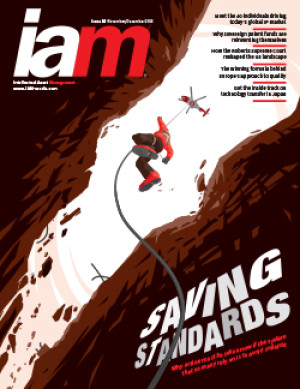 Time to save standards

Both sides of the standards wars are threatening to destroy our future. It is time to step back from the brink and take action to ensure a standards system fit for the 21st century

The US Supreme Court has had a major impact on US patent law during the last decade. From injunctive relief to fee shifting and patent-eligible subject matter, its opinions have reshaped the entire market
Matthew J Dowd and Paul Michel

How to make the most of tech transfer opportunities in Japan

Technology transfer from Japanese universities and research institutions has been minimal, compared to that in the United States. However, a new initiative looks set to change this
Luca Escoffier

The growth and benefits of specialised jurisdictions for IP cases

A growing number of countries have specialised IP courts, but their powers are varied and they are organised in different ways
Daphne Yong-d’Hervé

Time to save standards

Both sides of the standards wars are threatening to destroy our future. It is time to step back from the brink and take action to ensure a standards system fit for the 21st century
Arvin Patel

Sovereign patent funds have become key players in the global IP market. However, a shifting economic, legal and political landscape raises questions for the future of this state-backed aggregation model
Jack Ellis

The growth of China’s innovation economy, with the resulting surge in patent filings, has been a signal event in the IP world. Is the country blazing an unprecedented trail or following in the well-trodden paths of previous East Asian boom economies?
Alan Marco, Richard Miller and Jay P Kesan

Assessing the quality of European patents

Europe’s major patent offices are often lauded for the quality of the patents that they issue, but is the praise justified?
Claudia Tapia

Classic IP due diligence considers the validity, ownership and encumbrances of rights, and sometimes freedom to operate. But venture capitalists are increasingly requesting a deeper dive into patent assets and strategies
Patrick Pierre

Intangible investor: Turning up the volume on hearables

Tech companies with the right combination of products, patents and brand loyalty are hoping to cash in on high demand for intelligent hearing devices
Bruce Berman

Few trends on the IP scene have been as clear in recent years as the growing prominence of Asia in the patent market. This guide collects key information about patent prosecution and litigation in four Asian markets in 2016 to form a practical and insightful reference resource for chief IP officers