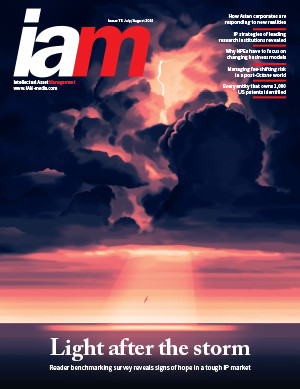 Hard times in the global patent market; but hope too, in places

Times are tough for IP dealmakers: pressure to monetise rights is increasing just as patent values are falling and deal volume is declining. There is uncertainty, too, around eligibility and SEPs. These findings and more are revealed in this year’s IAM IP market benchmarking survey

Know thyself: how well do you understand your own IP strategy?

If it’s broke, fix it

The market has arguably never been tougher for NPEs. In order to survive, several are now changing their business models; but it is not yet clear whether they can do enough to pull through
Richard Lloyd

The IP market’s centre of gravity appears to be shifting inexorably from the United States to Europe. But what do Asia’s IP owners make of this trend? We sat down with them to find out

Hard times in the global patent market; but hope too, in places

Times are tough for IP dealmakers: pressure to monetise rights is increasing just as patent values are falling and deal volume is declining. There is uncertainty, too, around eligibility and SEPs. These findings and more are revealed in this year’s IAM IP market benchmarking survey

Accelerated prosecution can result in impressive savings – for the right sets of patents. However, any cost effectiveness will depend on the technology and the value of the licensing programme being developed
Greg Benoit

Last issue, we revealed the companies that own the 100 largest portfolios of active US patents. Here, we expand the list to name each of the 383 entities that hold portfolios of over 1,000 assets, representing over 57% of all US patents currently in force
Michael Chernoff

Patents can greatly increase the value of a start-up and its prospects of success. Korean venture studio and start-up incubator FuturePlay has developed a model for lean start-ups that does not shortchange patent protection
Sungjae Hwang

Over recent years, many Asian countries have moved from developing status to become large-world economies. This has had a significant impact on the way that IP is viewed and used in the region
Hideyuki Ogata, Dick Thurston, Dongsuk Bae, Donald M Boles, Zarif Imam and Marek R Wernik

Since the mid-1960s, government R&D funding has plummeted, while more recently IP rights have been eroded; the result has been a decline in total factor productivity growth. Fortunately, some green shoots promise to alter this trajectory
Michael LoCascio

With many financial investors increasingly bearish on patents, true contrarians with an eye for a bargain are in a good position to profit
Bruce Berman and Bruce Berman

Consumers love new technology and innovative prowess in technology is a key source of economic strength. Yet patent systems – central drivers of that prowess – are under new waves of attack
David J Teece and David J Kappos

Risk is the chance of something going wrong, causing damage or loss; but many companies ignore IP risks and react only once the risk has materialised. In most cases this is too late to mitigate cost effectively
Donal O’Connell

As manufacturing changes due to the proliferation of 3D printing, patent filing strategies must change with it
Matthew Jefferies

SEPs and how to license them under FRAND terms have become hot topics. While the interests of SEP owners have been preserved in some jurisdictions, others have seen a move towards protecting licensees. A select group of correspondents provide in-depth overviews of the current situation in some key jurisdictions

SEP and FRAND 2016: FRAND and SEPs in the United States

SEP and FRAND 2016: Interpretation and application of Huawei by German courts