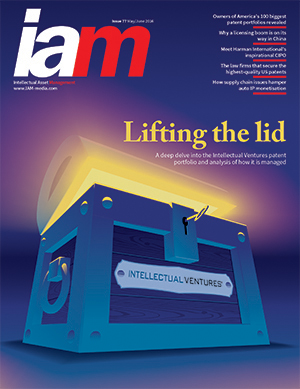 How Intellectual Ventures is streamlining its portfolio

By comparing Intellectual Ventures’ announced 2013 assets with its 2016 assets, it is possible to draw conclusions about the firm’s buying, selling and assertion activity – and to identify what you can do to help yourself should it come knocking

A business lawyer first and foremost, Harman International’s vice president of global IP and licensing Alyssa Harvey Dawson has opened the eyes of the connected technologies giant to the wealth of intellectual assets at its disposal

While an IP portfolio built on business value chain can have strategic value, companies should take a closer look at how strong links between intellectual property and innovation can expand a portfolio’s breadth and depth

The most valuable patents you can own are still those issued in the United States; but overall, the owners of the 100 largest portfolios of active US patents are rolling back their filing activity in the country

Building an IP economy in India

Whatever their views and motives, most stakeholders in the Indian IP system are agreed that it is in need of an overhaul. As to precisely what measures must be taken, however, that depends on who you ask

Now you see it…

This year’s Ocean Tomo US law firm patent quality ratings are published at a time when improving the standard of granted rights has become a hot-button issue. But as the case law continues to evolve and post-issuance reviews prove wildly popular, determining exactly what is meant by ‘patent quality’ can be tricky

China’s poor reputation in terms of IP protection and enforcement remains entrenched around the world. However, according to Tencent’s general counsel, the situation is not nearly as bleak as many believe

The nascent patent market in the automotive sector

When Tesla Motors pledged not to enforce its patents against those that practised them in good faith, many observers felt that the company had thrown away a host of future monetisation opportunities. However, the idiosyncrasies of the automotive supply chain suggest that the reality is more complex

Despite a recent spate of deals, generating significant royalty revenue from patents alone remains challenging in China; but for those with the right tech and know-how, the years ahead look full of opportunity

What every CIPO needs to know about the PTAB

Japan’s Fair Trade Commission has published its interpretation of competition law with regard to FRAND-incumbent patents, which clearly shows the influence of the European Court of Justice’s 2015 decision in Huawei v ZTE

While there has been some movement towards greater global collaboration, IP issues still tend to be addressed country by country. More and more, we find ourselves struggling with a multinational approach that needs to be rethought in this globally integrated era

Legislative and judicial efforts to rein in patent abuses have deterred legitimate enforcement. It will take a coordinated effort to swing the pendulum back

Tech company owners hoping to sell their businesses must be able to tell a coherent and convincing story about their IP evolution. Buyers need to realistically assess the value potential and possible risks contained in their target’s IP portfolio

If European SMEs are to make the most of patents, someone needs to give them the good news

Recent research indicates that start-ups that engage with the patent system enjoy substantial benefits, so why do so few European businesses get involved? Lack of access to third-party expertise may be a big factor