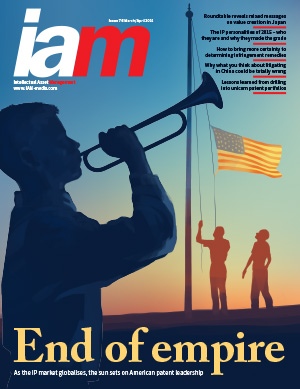 The United States has dominated the patent market since the 19th century. But with a weakening of patent rights and the steady march of globalisation, that pre-eminence is no longer assured. Welcome to the new multi-polar patent market

As augmented and virtual reality technologies grow in popularity, the incentives for patent owners in these fields to pursue aggressive licensing and enforcement campaigns are also set to increase

A common framework for evaluating damages and injunctive relief could reduce uncertainty in patent infringement remedies. The footprint analysis is one such approach

In November 2015 Tokyo’s Palace Hotel played host to the third annual IPBC Asia. In attendance were over 500 senior delegates from Asia-Pacific and beyond. What became clear over the three days of the event was that while other parts of the world may currently be in the IP doldrums, in Asia the mood is upbeat as intellectual property takes centre stage and strategies for managing assets grow ever more sophisticated

Patent litigation in China: protecting rights or the local economy?

It is a common perception that China’s patent system is overtly protectionist, self-serving and biased towards domestic industry. However, a closer look at enforcement data suggests that this is not necessarily the case

What unicorns can tell us about the real world

Labelling start-ups as ‘unicorns’ suggests that they might have mythical powers. However, from an IP perspective, they are just like any other company

They made an impression …

IAM has identified 10 IP Personalities of the Year for 2015. They all made a significant impression on the market, but for very different reasons

Japanese companies seem to have all the right ingredients to become IP value creation leaders, but many are struggling to realise their potential

The creation of high-quality patents not only enhances a company’s ability to protect its market share and derive licensing revenue, but also improves the innovation process itself

Confusion in the courts over functional claiming has encouraged opportunistic behaviour – in particular, using functional language which is disguised as structural language

With investment in financial technology at a five-year high, banks and credit card companies will need to rely more on patents to stay on top

IP strategist: How IP strategy is different for start-ups

While start-ups can be exciting and chaotic, they need to design an IP strategy just like any other business. Yet although the development process will be similar to that used by large corporations, the content and implementation will be quite distinct

The Patent Trial and Appeal Board’s new post-issuance review procedures have transformed the US patent landscape. Our panel of experts takes a closer look at the issues at stake