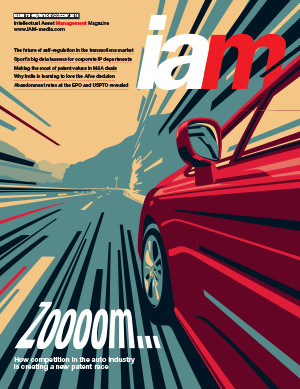 In the driving seat

The car industry is experiencing seismic changes and, as a result, patents have come further to the fore. Now, some are predicting an increase in litigation, with major players jockeying for position and NPEs sensing opportunities; others, however, are less convinced and see different dynamics at play

Businesses can reduce the risk of missing out on IP value by outsourcing key functions to specialists, writes Jason Resnick
Jason Resnick

To maximise investors’ return in financial transactions, value from all types of asset involved should be recognised and unlocked. When patents represent a meaningful portion of a financial transaction, a deal can be advantageously structured to reap that value
Tyson Winarski and Carlo Segantini

The IP market has never been more fluid, so there was plenty to discuss for the close to 700 delegates from over 30 jurisdictions who gathered for the eighth IPBC Global, held at the Palace Hotel in San Francisco from June 14 to 16. Patent reform and a series of unhelpful court decisions are driving greater numbers of players to look more closely at alternatives to the US market in Europe and Asia; while transactions are on the rise, with signs that prices might soon start going up. Company boards are increasingly looking at intellectual property, but may not yet have a proper handle on value and strategy. All this and a lot more was debated over the three days of another highly successful event

The IP Hall of Fame is a select group of individuals who have made an indelible mark on IP law and practice. Here we introduce the five people inducted to this elite club in 2015

Assessing patent renewal decisions in the United States and Europe

Global patent filings continue to grow; but the rate at which applications and granted patents are abandoned may provide more meaningful insights into the way in which these myriad assets are being used – or not used – by their owners
Maria Lazarova and Matthew Beers

Island in the stream

Patent assertions, razor-thin margins and intensified competition from mainland China mean that times are tougher than ever for Taiwanese companies. But the island’s massive IP arsenal could offer salvation
Jack Ellis

The right call: embracing big data in the patent world

When it comes to leveraging statistical data in order to hone strategy, in-house IP departments can learn a lot from the world of sport
Aaron Abood and Jeremiah Chan

The software industry is still grappling with the impact of the US Supreme Court’s decision in Alice v CLS Bank. But India’s IT heavyweights, well accustomed to a high patentability bar for computer-related inventions, see more opportunities than challenges ahead
Jacob Schindler

While US lawmakers consider legislative reform of the patent system, the LES Standards initiative has been launched with the intention of bringing conscientious self-regulation to the IP transactions marketplace
Bill Elkington

The intangible investor: Fathers of invention

A portrait of 19 important 19th century inventors that hangs in the neo-classical former US Patent and Trademark Office, now the National Portrait Gallery, foretells the future as much as it documents the past
Bruce Berman

IP strategist: Slipping through your fingers

IP insider: Out from the ‘murky morass’

Since the Supreme Court’s decision in the Alice case, lower courts have increasingly focused on eligibility issues under Section 101 of the patent statute. This is unfortunate and damaging

While legislators and the courts conspire to make life ever harder for patent owners in the United States, across the Atlantic imminent changes are taking the narrative in the opposite direction. This all means that Europe has a historic opportunity to assume global patent leadership