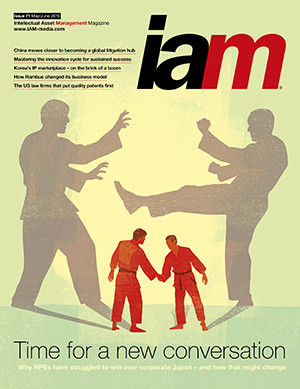 Japanese companies are increasingly interested in maximising the potential of their patent portfolios; but a combination of economic factors, cultural barriers and knowledge gaps makes one of the most obvious paths to value – patent monetisation – a challenging prospect

Free patent searches: at what cost?

When using patent information services, you get what you pay for
Bob Stembridge

Patents and finance – lost in translation

Justifying patent expenses can be tough for in-house counsel. However, finding a common language is crucial to helping chief financial officers understand how patents help their investments

It has never been harder to be an NPE in the United States, so it’s no surprise that at the NPE 2015 conference in New York, opportunities further afield were a major subject of discussion
Joff Wild and Richard Lloyd

Over 25 years Rambus has transitioned from a technology development company to a patent monetisation entity to a business focused on both licensing and product innovation. These changes have been driven from within, with the legal team playing a crucial role

Patent kings – the dominant players in the US patent landscape

There has been plenty of movement in the latest edition of IAM and MDB Capital Group’s annual listing of the world’s largest portfolios of active US patent assets. But it remains the case that a handful of companies still rule the roost

New review procedures introduced by the America Invents Act, recent USPTO initiatives and key rulings from the US Supreme Court have increased the focus on patent quality. This marks a significant change for companies and lawyers filing patents

Quality over quantity: the evolution of post-grant reviews

Instituted by the America Invents Act, the Patent Trial and Appeal Board was formed in September 2012 to limit excessive litigation costs and improve patent quality in the United States. We take a look at its progress since then
Pedram Sameni

Ballooning patent portfolios, new IP courts and intense tech-sector competition mean that activity in China’s litigation space is heating up. Could this become the next major forum for high-stakes patent battles?

The innovation cycle: an IP strategy for sustained business leadership

A great innovation is only the first step for success. The best companies understand that the key to sustainable advantage is to build a model for successive innovation so that they are continuously one step ahead of their competitors

Towards a working definition of patent quality

Interested in making good patents the rule rather than the exception? Let us start with a more reliable definition of ‘quality’
Bruce Berman

The French defence: clarifying the scope of experimental use exemptions

Retreating from strong bio-industry innovation incentives could damage our health

The biotech sector is rarely mentioned in the US patent reform debate, but proposed legislation and recent court decisions present it with major challenges