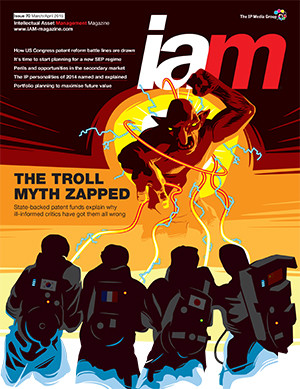 Sovereign patent funds may be a convenient target for anti-troll campaigners, but the truth about their activities is much more nuanced than some would have you believe

Puttin’ on the Ritz

In December, a diverse crowd of over 400 IP stakeholders from across Asia, as well as further afield, gathered in Shanghai for IPBC Asia 2014. It may have been cold outside, but the rapid pace of change in the IP markets across the region meant that the atmosphere inside the Ritz-Carlton crackled with heat, as discussions focused on monetisation, value creation, investment and the political and judicial developments that affect them.

The unregulated era of standard-essential patent licensing is coming to a close. While such licensing has always taken place within a web of rules, the controls were not seamless and the amounts of money involved – especially in the telecommunications sector – invited gaming
Matthias Schneider and Thomas Ewing

IP monetisation in the new marketplace of 2015 and beyond

Recent judicial decisions and legislative reforms in the United States are transforming the patent marketplace as we know it. To keep up with the change, rights holders will have to reassess their transaction strategies

As the 114th US Congress gets underway, Congressman Goodlatte has already signalled his intention to make patent reform one of his top priorities. But with the opposition camp far better organised, a drop in patent litigation and Supreme Court decisions changing the dynamic, the landscape now looks very different
Richard Lloyd

The secondary market in patents: help or hindrance for start-ups?

While patent sales may offer early-stage companies a new route to return on investment for innovation, they also equip buyers with assets that could be enforced against start-ups. Working out the net benefit – or otherwise – is a complex task
Chaitanya Ramachandran and Maria Leonor Cabanelas

Critics of the IP system often argue that patents have little or no role to play in the success of start-ups and their ability to secure funding. However, a recent study of early-stage businesses backed by French investors would suggest otherwise
Yann Dietrich, Yann Méniere, Tim Pohlmann, Justus Baron and Long Nguyen-Dinh

As technologies become increasingly complex, many companies rely on open innovation to bring products to market. Benefiting from public research by means of technology transfer is therefore vital
Michel Neu

As the secondary market in patents continues to grow, the pratice of licensing a whole portfolio without valuing the majority of patents within it is making less and less sense
Marc Ehrlich, David Kappos and Richard Ludwin

New Zealand patents can now be challenged by any party in a re-examination procedure. However, the outcome could have some unwelcome consequences
Ian Finch and Jonathan Lucas

The intangible investor: What’s in their wallet?

Companies that are adverse to strong patents must be careful not to put all of the blame for bad behaviour on non-practising entities. What goes around comes around
Bruce Berman

IP strategist: Where to file for big results

While the number of patent filings in jurisdictions such as Hong Kong and Singapore seems disproportionate to their populations, geographical convergences can provide opportunities for the savvy filer

The IP personalities of 2014

In a year of change for the IP market and its further internationalisation, some achievements and developments stood out