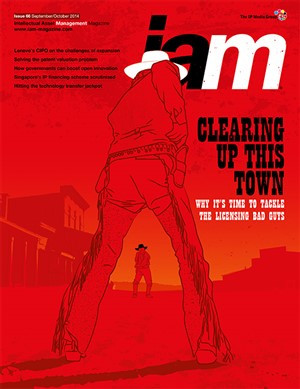 Building a white-hat brand in the patent industry

With policy makers, business groups and the public demanding action to curb abuses in the patent industry, companies must now differentiate themselves from the taint of patent trolls, developing a white-hat brand not only within the industry, but for the industry as well

Under pressure: streamlining operations in the IP business

The findings of a recent survey of inhouse legal departments and private practice law firms underline just how important it is to get the right people and processes in place for efficient IP management, writes Adam Jaffe of Thomson Reuters
Adam Jaffe

Is your country ready for open innovation?

As technologies become increasingly complex, many companies rely on open innovation to bring products to market. Governments can take measures to encourage open innovation and improve their countries’ position on the world stage
Michel Neu

Universities and government labs – especially in the United States – are keen to transfer technologies into commercial ventures. It can be tough, but not impossible, for corporates to engage with those organisations and find those innovations
Laura A Schoppe

More than 600 delegates from over 45 countries gathered at the sell-out IPBC Global 2014, which took place at the Hotel Okura in Amsterdam from June 22 to 24. Attended by senior operators from all parts of the IP marketplace – including chief IP officers, executives from major public IP companies and other non-practising entities, financiers and investors, brokers and other intermediaries, policy makers, lawyers and service providers – IPBC Global 2014 was a resounding success, from the first plenary session featuring Philips president and CEO Frans van Houten to the final breakouts
Jack Ellis, Joff Wild and Richard Lloyd

For patent practitioners, translation is everywhere

Patent translations involve some of the most technically and linguistically challenging material available, but are often an afterthought. As global patent filings grow, a rethink of how we approach patent translations is needed
Matt Sekac

Early-stage IP-based collaborations can help small start-ups to expand globally and feed the innovation pipelines of larger companies. It is all about building relationships and trust, and keeping the lines of communication open
Gary N Keller

Traditionally, the job of in-house counsel is to protect innovation rather than to encourage it. However, with the right mindset, those in the role can also play a critical role in the inventive process itself
Michael T Moore

Once known simply as a PC maker focused on the Chinese market, Lenovo has grown into a global tech giant. Now, as it looks to grow its mobile business in the mature markets of Europe and America, it has placed patents at the heart of its strategy
Richard Lloyd

With intellectual property now recognised as a major component of corporate value, the need for an accurate and widely accepted patent valuation method is more important than ever
Joo Sup Kim, Jandy Kim and IlSoo (Bryan) Kim

The United States lacks a strong framework for protecting trade secrets at the federal level. However, proposed legislation could be about to shake things up and provide new protection in this area
David Kappos

Cinderella story – is prior art the hidden beauty of intellectual property?

For some consumer electronics companies, prior art libraries have become a first line of defence against patent assertions and an extremely effectively tool against non-practising entities
Peter Spours

Despite a more restricted view of innovation and efforts to rein in bad IP behaviours, patents are more uncertain than ever. Some IP investors are certain to profit
Bruce Berman

In one of the most eagerly awaited IP judicial decisions in recent years, the US Supreme Court appears to have refrained from restricting the patentability of software
John Lanza and George Beck

Going in with eyes wide open

The License On Transfer Network is a welcome addition to the IP ecosystem, but the companies which sign up to become members need to be clear that they are sacrificing a large part of the strategic flexibility that patent ownership can bring