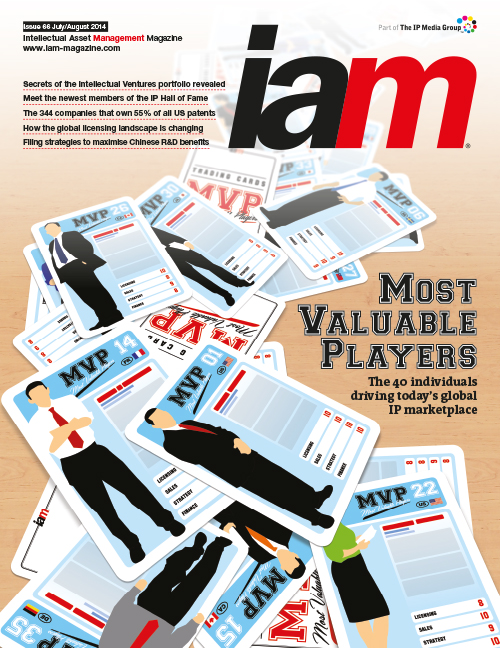 There is a select group of
individuals whose connections,
decisions and actions drive
the ever-expanding global IP
marketplace. Over a three-month
period, IAM set out to identify them.
The names we came up with are
revealed on the following pages

New clauses on the protection ofgenetic resources were added tothe amended Chinese Patent Lawfour years ago. So far, it appearsthat the new filing requirements – inparticular, the genetic source form –are not placing an undue burden onapplicants

APIs, imports and the Bolar exemption: concerns and practical measures

Although South Korea’s new Patent-Approval Linkage System will not befully implemented until 2015, thereis already keen interest from globalpharmaceutical companies. Yetwhile the system should strengthenpatent rights, it may also increasethe number of disputes

Australia sets its own course on the patentability of biotechnology

As the Indian patent regime iscontinually evolving, applicantsseeking to protect their inventionsin India must pay careful attentionto the legislation and Patent Officeguidelines

The significant increase in thevolume and availability of dataabout intellectual property,combined with major advancesin data science, make this theperfect time to apply big datasolutions in order to producepowerful analytics and IPvisualisations

Design in three dimensions: choices and challenges for legal protection

At the end of last year, IntellectualVentures launched a publicdatabase providing details of33,000 patent assets that itcurrently owns and manages,allowing an in-depth analysis of itsportfolio for the first time

The role of education in technology commercialisation

Experience, expertise and thelatest know-how are the keysto success in turning R&Dinvestments into commerciallyviable products and services

IP valuation in the digital economy

With more consumer activity takingplace online than ever before,it is imperative to find ways ofmeasuring the economic valueadded by technologies that enablee-commerce, especially when itcomes to calculating awards forpatent damages

Companies with R&D operations inboth China and the United Statescan choose the best jurisdictionin which to file their initial patentapplication. This can have a majorimpact not only on priority andgrant dates, but even on the qualityof the initial patent draft

While hundreds of nominations arereceived, only a select few individualsare chosen for induction into theIP Hall of Fame each year. Theachievements of this year’s inducteesconfirm their status as thoughtleaders in their respective fields

Last issue, we revealed thecompanies that own the 100 largestportfolios of active US patents. Here,we expand the list to name each ofthe 344 entities holding portfolios ofover 1,000 assets, representing 55%of all US patents currently in force

Sign of the times: trends in technology IP licensing

While an IP strategy is the goldstandard, it is not always possible dueto constraints on time and resources.However, a patent roadmap and partialdeployment by IP teams can still make adifference to an organisation’s bottom line

Over the next three to five years, halfor more of the 30 or so public patentlicensing companies are likely to merge,go private or otherwise disappear.That’s not necessarily bad news for IPinvestors or holders

A round-up of IP-related quotes, observations and opinions fromthe recent past ...