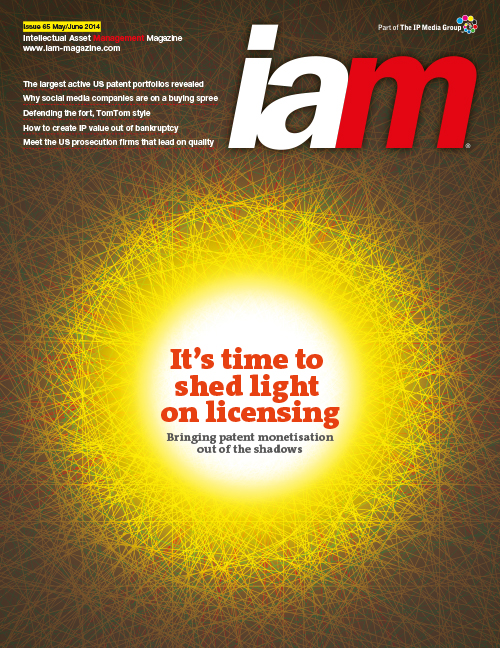 The role of trust in patent monetisation

As patent monetisation-focused
business models continue to attract
controversy, it is more important
than ever for non-practising entities
to demonstrate integrity and
trustworthiness in order to secure
partnerships with patent owners

Some of the best prospects forvalue creation, and the mostsignificant risks, lie in creative useof the IP portfolios of financiallydistressed businesses

The second edition of the US Patent 100, which names the entities with the largest active US patent portfolios, looks very different from the first list published this time last year

Beauty is in the eye of the holder

Google’s recent sale of Motorola Mobility’shandset business to Lenovo for $2.9billion is a reminder that the meaning of apatent acquisition is as much a reflectionof perceived need as it is of market value

Navigating the pitfalls of patent transactions

While the patent market remains busy,parties must avoid several potentialsnags before successfully completinga transaction – particularly wheremonetisation efforts are led by a centralteam, but intellectual property is ownedby individual business units

Getting the right balance: proposed US legislation aimed at abusive patent litigation

Last September the South Africangovernment published its draft nationalIP policy for comment. It covers a rangeof IP issues, including proposals on theway in which pharmaceutical patentsshould be dealt with

Evolving is not just for business models

A round-up of IP-related quotes, observations and opinions from the recent past...

If recent reports coming outof China are accurate, thecountry could now be leadingthe world in IP financing. Thereality, though, may be a littlemore nuanced