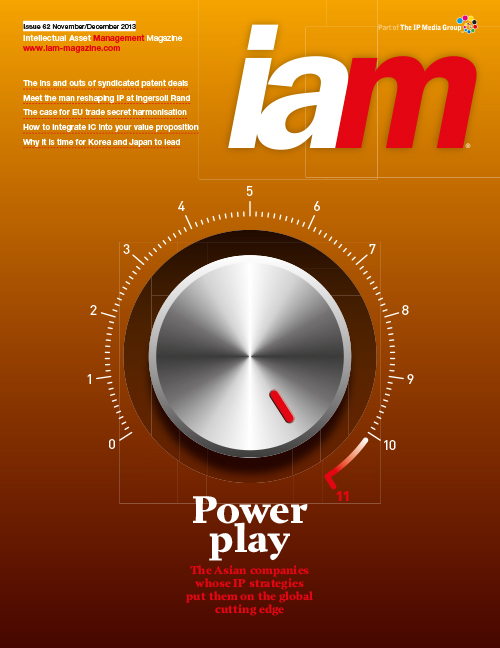 After an in-depth research process to
identify companies in the Asia-Pacific
region with world-class IP functions
and strategies, IAM reveals those
that lead the field and takes a closer
look at their operations

Comparative review of IP landscapes in the US, Japan and Korea

Japan and Korea watch and wait forthe impact of the America InventsAct on their markets. But howcan these countries take a moreprominent role in shaping the globalIP landscape for themselves? Theanswer may lie in harmonisation

Translation of patent applications: a challenge in globalised IP management

In a globalised world, the qualityof patent translations has becomea key issue. A recently conductedsurvey reveals that poor translationsare widespread and are causingactive harm to patent owners

After years as the world’smanufacturer, Taiwan is beginningto take its place as an IP playeron the global stage. However,companies preparing to competeinternationally need to have aneffective IP strategy in place inorder to avoid costly mistakes

There has been much discussionover the latest draft rules forenforcing antitrust provisions inIP agreements in China. Thesecould well signal a new wave ofenforcement and there are fearsthat foreign rights holders may bearthe brunt of this

From IP to IC: why intangible capital matters

The European Union lacksuniform regulation on trade secretprotection – despite the fact thatthey can be among a business’smost valuable assets. But theEuropean Commission is currentlyworking towards a harmonisedsystem of protection

Syndicated patent deals: the supercharging of selling and buying

Two years ago Bruce Schelkopfwas brought into Ingersoll Rand tocreate an IP culture at the 100-yearoldcompany. Here he discusses hisprogress and the relationships thathave helped him along the way

3D printing – the breakthrough technology that could change the world

Long the stuff of science fiction,3D printing is not only real, butfinding new applications – fromaerospace to biomedicine – everyday. A careful analysis of thepatents behind the technologysuggests that home 3D printerscould become as ubiquitous as PCswithin the next few decades

Computer-driven glossaries wouldlead to higher-quality patents andless litigation. The technology isavailable to put them in place

The new Chinese Trademark Law at a glance

On 30th August China passed longawaitedamendments to the TrademarkLaw. The changes will become effectiveon 1st May 2014

IP theatre at the ITC: get your programmes

It is high drama and high stakes at theInternational Trade Commission forApple, Samsung and the public interest.As their back and forth continues andthe patent battle escalates to the levelof legal theatre, the only thing for sure isthat it is not over yet

Can a handful of small, publicly tradedcompanies play a significant role in howthe IP value and performance of largerbusinesses are measured? Yes, they can

Senior decision makers atNokia have come under firein recent years, but by neverlosing sight of the importanceof R&D and the creation ofhigh-quality patents, theyhave ensured that the Finnishcompany has an exciting future

China: the inside track