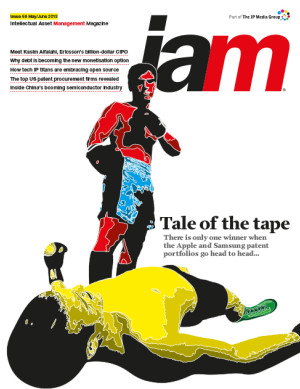 Apple, Samsung and the battle for patent supremacy

Apple and Samsung have been slugging it out in court in various parts of the world for several years now. An analysis of the two companies’ patent portfolios suggests that one has a very strong advantage over the other

Why it’s time for designs

Registered designs can protect your brand’s x-factor and as a result are a powerful arrow in the IP quiver, writes Kristin Geboers of the trademark business of Thomson Reuters
Kristin Geboers

A shifting landscape: patenting in the Chinese semiconductor industry

After a decade of growth at home, Chinese semiconductor companies are poised to take a larger share of the global market. They are also rapidly increasing their patenting activities. Multinationals should sit up and take note – not just in China, but in their own jurisdictions as well
Howard Curtis, Jinwei Wu and Gordon Holstead

Most heads of IP departments can only dream of reporting direct to the CEO. For Ericsson CIPO Kasim Alfalahi, however, this dream has become a reality. He talks us through his first year since gaining entry to the C-suite
Sara-Jayne Clover

IP debt is a new way to raise cash from patents without having to sell or enforce them. However, it can be a high-stakes game and companies need to take care that they do not lose control of valuable intellectual property
Joseph W Jennings

As the widespread adoption of Android has shown, consumer technology companies are increasingly turning to various open source software platforms to boost their competitive advantage. At the same time, open source developers are recognising the benefits of IP protection
Jack Ellis

State of practice in software valuation

Software is everywhere, but putting a value on it is a tough challenge. A distinguished panel of experts discuss how it might be done
William C Elkington

Trade secrets have always been valuable, but the America Invents Act means they are now worth more than ever – potentially even more than patents. What is the best way to take advantage of this type of protection for your inventions – and what are the pitfalls?
Bruce A Story

While the elite patent prosecution firms in the United States may face more challenges than ever before, the fact that intellectual property is moving to the top of the corporate agenda means that the future has never been brighter

Intangible assets: safeguarding what really matters most to companies

It is no longer an option, but an absolute imperative, for security and risk management practitioners to acquire an operational familiarity with intangible assets
Michael D Moberly and Jackie Maguire

Using regression models to isolate the value of a patented feature

Regression models not only can provide a quantitative measure for damages in US patent cases, but also can provide additional insight into topics such as non-infringing alternatives, market equilibriums and cannibalisation that can help to strengthen a damages model
Ryan Schultz, Jake M Holdreith and Christine Yun Sauer

Increased investor appetite in the IP asset class and the substantial benefits offered by a public listing have enabled many public IP companies to accomplish and accelerate their business objectives. A good example is ParkerVision
Eli Dominitz

Proposed changes to Hong Kong’s patent regime are far reaching and, potentially, game changing for both practitioners and their clients
Steven Fung and Michael Lin

Silicon Valley: too big to fail, or too big not to?

Successful tech companies have transformed what was once the cornerstone of invention into a place that is strangely inhospitable to bold ideas and strong IP rights. What will it take for Silicon Valley to get its mojo back?
Bruce Berman

SHIELD: a deeply flawed response to an unquantified problem

Before legislating against alleged abuses of the patent system by non-practising entities, US politicians need to make sure that they can separate fact from anecdote, theory and hunch

In today’s globalised market, it is more important than ever to make smart decisions on trademark selection, registration and enforcement. A successful brand management programme can play a vital role in minimising risk and maximising value
Cynthia Walden

India’s rise to prominence on the international scene has made it an increasingly attractive market in which to do business. The trademark regime is continually being refined to accommodate this growing interest
Swati Sharma and Safir Anand

The European Court of Justice’s eagerly awaited decision in the IP TRANSLATOR case marks a turning point in the examination of trademark applications across the European Union. Applicants will need to review their filing strategies accordingly By Christian R Thomas,
Christian Thomas

Protecting trade dress is a delicate matter – not least because the way in which it is promoted directly impacts on enforceability. However, a well-thought-out strategy can result in a trademark right that is valid before the US Patent and Trademark Office
Elizabeth W King