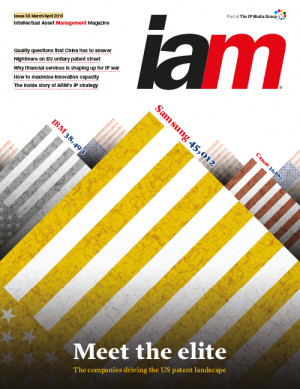 Introducing the dominant players in the US patent landscape

The US Patent 100 is a unique data set that identifies not only which entities own the most active US patents, but also those that own the fastest-growing portfolios and those which are most recognised by the competition

When it comes to “perfect” software, there are as many definitions as there are users, writes Brandon Trenz of Thomson IP Management Services
Brandon Trenz

Reflecting on a successful IPBC China

Companies across Asia are beginning to put much greater emphasis on intellectual property as a major business asset. The IPBC China in Beijing last December provided a forum for them to learn more about how to develop effective value creation strategies

The Double Irish, Dutch Sandwich and other delights

Only a decade ago the world’s leading semiconductor intellectual property company, ARM Holdings, had no internal patent counsel. Head of IP Samantha Funnell explains the challenges she faced in creating the in-house function
Sara-Jayne Clover

Europe has spoken: now it’s up to the judges

Two new regulations have brought Europe closer than ever to a unitary patent regime. However, the compromises that have been deemed necessary risk creating a patchwork system far more complex and hostile to users than that which it will replace
Philip Westmacott and Alan Johnson

Although China became the world’s leading patent filer in 2011, patent quality is still a serious issue. Is the country’s network of patent-related policies and practices actually contributing to these problems and hampering innovation?
Dan Prudhomme

In today’s challenging economic climate, cash-strapped companies must increase their competitiveness using fewer resources. Shrewd innovation management strategies can optimise the R&D effort – and IP functions have a crucial role to play in this regard
Jack Ellis

Why the next IP battleground could be exchanges and financial services

If you thought the smartphone industry was big, take a look at the multitrillion-dollar exchanges and financial services sectors. The potential patent battles between industry players could well dwarf anything seen in the Apple v Samsung dispute
Michael D’Andrea and John Ciannamea

In order to maximise the value that a company gets from its IP-based transactions, it needs to put in place an effective management strategy that encompasses all relevant parts of the business. Three acknowledged experts in this field explain how it can be done
William C Elkington

Why public IP companies could be 2013’s happy ending

While isolating a clear valuation pattern for public IP companies is difficult, those offering significant blue-sky potential and simple stories, together with consistent communications and tradable catalysts, are being embraced by public market investors
Eli Dominitz

ONEL muddies the waters over use of Community trademarks

Rights holders are likely to be disappointed by the ECJ’s decision in ONEL, which fails to provide a final answer as to whether use of a Community trademark in one member state is sufficient to maintain that mark
Christopher Benson

This is likely to be a crucial year for publicly held licensing companies (PIPCOs). Interest is booming as a result of savvier IP investors, PIPCOs’ access to capital markets and better marks in court
Bruce Berman

The IP personalities of 2012

As it does every year, IAM has identified a group of individuals, organisations and entities who helped to shape the IP landscape in 2012