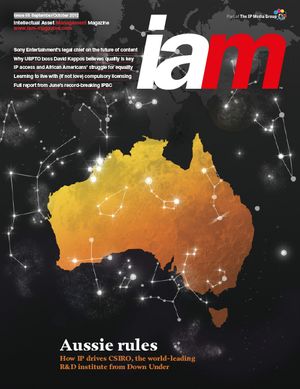 Inside a world leader Down Under

Australia’s CSIRO became a major
talking point earlier this year when it
won a multimillion-dollar settlement
in a US dispute over WLAN patents.
But while the pay-out grabbed
headlines around the world, there is
a whole lot more than litigation
driving this unique institution

How companies respond to crisis
situations can have a significant
impact on their reputations. Despite
this, too few prepare for the almost
inevitable day when something
goes badly wrong

Pretty robots are the future

Traditional models of advertising –
online and offline - are slowly dying
a death; but content providers still
need to generate revenue if their
businesses are to endure. The
solution could just be a new kind of
intellectual asset

Of patent feet and metres: getting to standardised patent quality measures

Given the paramount importance of
intangible assets in the modern
knowledge economy, it is high time
that the global patent system
normalised towards a standard
measure of patent quality

The real McCoy: should IP rights be the new civil rights?

Fostering the creation and
exploitation of intellectual property
among African Americans should be
a key aim of the civil rights
movement in the United States.
And there is much that the IP
community can do to help

The rise of compulsory licensing

There are many types of
compulsory licensing. Some of
them are recognised as legitimate
under international treaty and law;
others are not. But whatever kind it
is, compulsory licensing seems to
be on the rise, and for IP owners
that is not good news

Since its formation in 2003, the
China Business Exchange has
enjoyed remarkable growth. During
this time CTEX, its technology
exchange platform, has become an
IP leader. The two men behind the
exchanges explain how

Despite the recent political
agreement to create a unitary EU
patent court, there is still a long way
to go before patent law and
practice are fully harmonised across
the continent

The fifth IP Business Congress was the biggest yet. Held in Cascais, Portugal, it featured a world-class roster of
speakers joined by delegates from industry, finance, government and the law. The event took place after a year in
which patents were at the centre of some major high-profile deals and, as a result, were attracting C-suite and
investor attention like never before

First lauded, then lampooned and
perhaps finally lamented, the Twitter IPA
sheds light on the dark side of the patent
arms race

Negotiating the patent pool of your future

Standards licensing can be a viable
option for the monetisation of R&D
investments and generation of IP income
for patent owners. It can also bring a
number of other benefits

A class of its own

Patent wins are overlooked and under-reported

Defining a patent “win” is not as simple
as it may appear. It defies easy
explanation and differs by industry,
company and audience

The UK prime minister
declared the United Kingdom
the winner after EU member
states finally agreed a deal to
create a unitary patent and
court system in Europe.
However, subsequent events
mean that he may have spoken
too soon