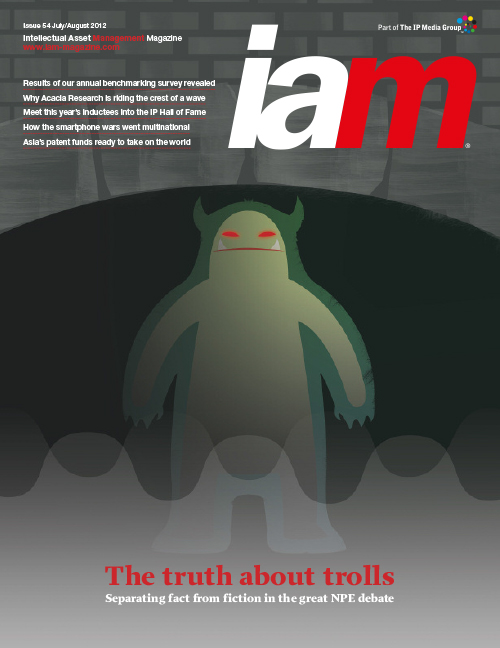 Much of what is said about the activities of NPEs – both critical and in favour – is actually based on anecdote and belief, rather than fact

The key to successful trademark licensing

Trademark and brand licensing are significant elements of HP’s IP licensing practice. For other brand owners, it may be worth considering adding such a practice to their own IP valuecapture models

Raising the bar to patentability in Australia

Late to the race, not the victory

Buying late and paying a premium for the patents that a company needs is no longer just a viable IP strategy; it is asurprisingly lucrative one

Every year, a set of individuals is inducted into the IP Hall of Fame. For 2012, six people - all leaders in their fields and renowned among their peers - have been chosen tojoin the ranks of a very elite group

There are a growing number of active patent funds in Japan, Korea, Taiwan and China. They have been established for different reasons, but all are seeking to become active global players

A game of scale

Companies which see the exponential market capitalisationgrowth that Acacia Research has enjoyed over the last three-and-a-half years are bound to attract attention. The question that investors are asking is whether the NPE’ssuccess is sustainable over the long term

Unlike BP, Transocean escaped the initial reputational fall-out following the Deepwater Horizon disaster in 2010. But as the former finds itself in an improving situation, the latter’s standing is now on the decline

The art of doing good and doing well

Artron is a unique Chinese company built on copyright. Its founder and CEO, Mr Jie Wan, speaks exclusively to IAM about what inspired him to establish his groundbreaking business

With trade in IP rights attracting heightened attention and financial markets becoming increasingly important, the concept of an organised IP rights market is gaining traction. From a geostrategic point of view, Europe must consider the role that it hopes to play in this global phenomenon

The capacity to make better decisions – and to make them faster than your competitors – is the ultimate strategic IP advantage. When everything else appears to favour the opposition, swift and proficient decision making can tipthe scale

The annual IP benchmarking survey conducted jointly by IAM magazine and the IP Solutions business of Thomson Reuters took place in the early spring of 2012. As ever, the results make for fascinating reading

It’s time for business students to get an IP education

Many subjects are taught at business schools, but intellectual property is not usually one of them. Until that changes, widespread executive ignorance of what IP is allabout is bound to continue

Patent licensing in the semiconductor and electronicsindustries has always had a US focus, but today a myriad of multinational consumer electronics and telecommunications companies are battling over IP issues in as many as 10 different jurisdictions simultaneously

There are various ways in which life sciences companies can create extra value from their IP rights. In some jurisdictions, alternative legal remedies may be available tocounter infringement

A major decision from the US Supreme Court questions the scope of what can be considered as patentable subject matter. It could have major implications in the life sciences industries and beyond

The legality of reverse payment settlements in Paragraph IV disputes

‘Pay-for-delay’ agreements between innovator and genericmanufacturers have been the subject of much controversy.Several cases have raised questions over the legality of these payments

Senior executives in the life sciences industries need a keen understanding of how to build and maintain a strong portfolio in order to enforce and defend their IP rights. Well-managed IP rights will also be an enabler of collaborationand further innovation

A round-up of IP-related quotes, observations and opinionsfrom the recent past ...

Although its recent decision to abandon offensive patentingmakes Twitter look like the good guy in the eyes of many,the company has wiped a considerable chunk of valuefrom its patent portfolio and made future strategic decisionmaking far harder