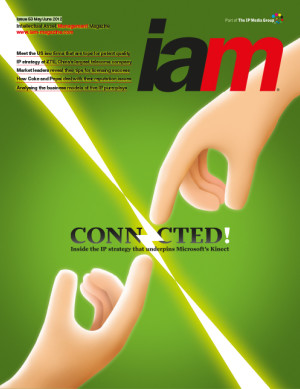 A revolution launched on the back of IP

It is the fastest-selling consumer electronics device ever, with 18 million units sold worldwide as of January 2012. The Kinect story shows that by linking the IP function with all internal divisions and putting IP strategy at the heart of corporate culture, Microsoft has been able to offer the world something truly revolutionary

For over 200 years, Brazil has been setting itself up to be a model of brand protection and for companies seeking to invest in the country that is good news, writes Jeroen Lallemand of Thomson Reuters
Jeroen Lallemand

The view from the top

ZTE is China’s largest telecoms company. It is also a major global player and the owner of one of the world’s biggest 4G patent portfolios. And that, says head of IP Haibo Wang, is what makes his job so enjoyable
Victoria Wang

Licensing is all about deal making. And deal making is all about people. Only highly skilled, highly talented people can consistently put good deals together. A select group of the very best discuss the challenges, pitfalls and joys of negotiating
William C Elkington

In the perennial battle between Pepsi and Coca-Cola, reputation and the way it is managed is everything
Nir Kossovsky

The sheer number and opacity of licensing models is mind numbing. A study of five publicly traded IP pure-plays reveals useful insights into what has made them successful licensors
Pat Kennedy

Most investors are unaware that social media is ushering in a social capital revolution, and that this will change the underlying risk and growth profiles of companies
Barbara Gray

Did high-tech titans win the US patent war?

A series of developments over recent years, culminating in the signing of the America Invents Act into law, have significantly shifted the balance of power in the patent marketplace to operating companies with large portfolios. Whether this is a good thing remains to be seen
Charles Neuenschwander

To sell or not to sell

If it ain’t broke, fix it anyway

Patent suits are down relative to a 29% increase in grants over the past decade; median damage awards are at a 16-year low. So how come everyone and his cat wants to fix the patent system?
Bruce Berman

Trademarks and sponsored links: the stream is not drying up

ICANN’s new gTLD programme could revolutionise the Internet. Brand owners should familiarise themselves with the new and evolving procedures if they are to avoid being left behind
Jason Cody and Katherine M Basile

Border seizure in the European Union –a universal legal tool

Under the EU customs regime, rights holders can have counterfeit goods confiscated at the borders. However, it is questionable whether the regime adequately considers the rights of alleged infringers
Christian Thomas

The 2012 inductees into the IP Hall of Fame

The IP Hall of Fame was established in 2006 to identify and honour the individuals who have helped to establish intellectual property as one of the key business assets of the 21 century.

Investors are beginning to see the potential in intellectual property. And although company boards of all sizes may still struggle to appreciate it, this state of affairs cannot continue forever