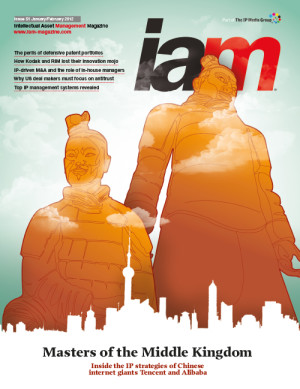 Open sesame for innovation at Alibaba

From its beginnings as a website for small Chinese businesses, the Alibaba Group has grown to become one of the world’s leading internet companies. Behind the company’s success has been a willingness to innovate, as Roger Shang, Alibaba’s chief patent and technology counsel, explains

Doing more with less is a challenge facing many in-house IP functions. Thankfully there is help at hand, writes Adam Jaffe of Thomson Reuters
Adam Jaffe

Many aspects of US patent law and practice have changed following the enactment of reform legislation. As a result, organisations should review their patenting procedures to see whether they too are in need of reform
Edward Van Gieson

Overcoming the barriers to innovation

An internet portal linking all stakeholders could facilitate the innovation process in Europe and across the world, thereby enhancing potential outcomes
Herbert Nestler and Claude Dreyer

Localities, like all other public sector bodies, face an increasingly competitive and globalised environment. A carefully designed brand can help a locality to increase its visibility and show off its competitive advantages
Jodie M Cohen-Tanugi

An update on the market for advanced IPM software systems

RIM and Kodak were once masters of all they surveyed; but not any more. As their fortunes have declined, so their reputations have plummeted. Disgruntled shareholders are now looking for people to blame
Nir Kossovsky

The role of IP management in mergers and acquisitions

A growing number of companies understand that M&A deals which fail to consider the IP issues involved in a tie-up can end up causing more problems than they solve. A group of senior in-house IP professionals discussed a number of M&A-related IP issues at a recent LES meeting in Paris
William C Elkington

A race to the bottom

The defensive patent arms race, and companies’ consequent focus on quantity rather than quality as they build their portfolios, causes them and others a great many problems
Colleen Chien

The Nortel patent auction and Google’s proposed takeover of Motorola Mobility have attracted the attentions of US competition regulators. With several other highstakes patent transactions on the cards, chief IP officers need to know the dangers of violating antitrust law and the steps they can take to avoid costly consequences
Jack Ellis

The decision to create, rent or acquire patents is becoming less confusing for some cash-rich companies. A new role for C-level executives and investors may be emerging
Bruce Berman

The NPE reality is very different from the media myth

Although non-practising entities are often portrayed as nothing more than parasitical patent trolls, the reality is far more nuanced. And when it comes to behaviour that harms innovation, perhaps some operating companies deserve a much greater share of the blame