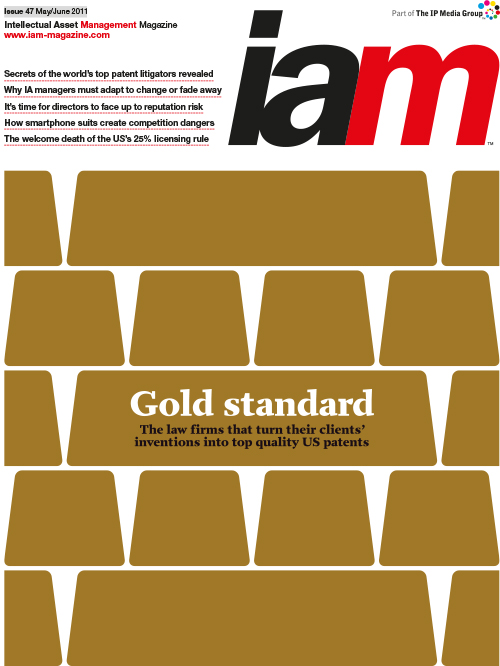 Consistently securing quality
patents for your clients is a tough
job. An IAM/Ocean Tomo
collaboration reveals which US
firms are doing just that and looks
at the secrets of their success

The Federal Circuit’s recentdecision in Uniloc v Microsoftregarding the 25% reasonableroyalty rule is not only on point,but also long overdue. But thecourt did not get everything right

The value of IP as a commodity

Developed as a new andtransparent way of trading IPlicence rights, IP ExchangeInternational (IPXI) has created quitea stir in the IP transaction market.One of the people behind its roll-outexplains how it works

The world economy continuesto change, so the way in whichcompanies manage their intellectualassets has to change too. Neverhas the term “adapt or die” beenmore appropriate

The smartphone IP wars havecaptured many newspaperheadlines. If the companiesinvolved are not careful, they mayalso soon attract the attention ofEuropean competition authorities

The essential skills of a leading patent litigator

Many people describe themselvesas patent litigators, but only aselect few can be considered worldclass. Those who are often sharesimilar traits

A lost reputation can cost acompany billions of dollars;the personal implications for itsdirectors are equally as serious

Although intellectual assets oftencomprise the bulk of corporatevalue, their oversight – if it exists –is all too often diffuse anduncoordinated. A recent IAFSroundtable discussed how thissituation might change if there werea post-holder inside companies totake overall responsibility for them

European Court of Justice says “no” to European Patents Court

Europe’s top court may have ruled that aproposed single patent litigation systemis not compatible with EU law, but that isnot the end of the story

A round-up of IP-related quotes, observations and opinions from the recent past...

On 25th February the identities ofthe five individuals to be inductedinto the IP Hall of Fame for 2011were revealed.

RPX, an IPO and a question of future direction

For those looking for accurate andconsistent IP data there are a varietyof new technologies, processesand practices that can help, writesAdam Jaffe of Thomson Reuters