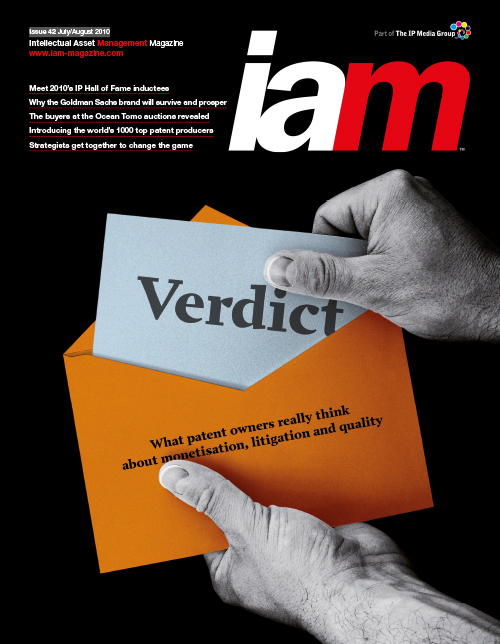 The state of play

An in-depth survey of both
corporate and priv ate practice IP
professionals, jointly undertaken by
IAM and Thomson Reuters, yielded
a number of fascinating findings –
not least of which is just how
dynamic the IP market really is.

A “trade secret” is defined as anyproduction method, sales system or otheruseful technical or operational informationrelated to a business activity that is notknown to the public and that has been keptin confidence (Section 2(6) of the UnfairCompetition Prevention Act).

Trade secrets in the United States

There is no statutory definition of a tradesecret in the United States. However, thereis a trend towards achieving someuniformity, with 46 states having adoptedvarious statutes modelled after the UniformTrade Secret Act (UTSA). The UTSA is amodel law drafted by the NationalConference of Commissions on UniformState Laws. States that have not adopted theUTSA (eg, New York), have adopted theirown state statutes and/or continue to applycommon law.

The Mexican legal system establishesprotection for some, though not all,information. The elements that any giveninformation must include in order to beconsidered as a trade secret are set out inArticles 82 and following of the IndustrialProperty Law.

Value and market price of patents: let’s be realistic

The true value of a patent is anelusive concept which is tricky topin down. While hard data canassist in a valuation, it is moredifficult to predict the influence thatmore intangible elements will haveon market price.

The achievements of IP Hall ofFame inductees set them apartfrom the crowd. Those who havemade it into this elite group thisyear are no exception.

Goldman Sachs has been clear formany years that its reputation is akey corporate asset. But recentevents have shown that having suchawareness is not always enough.

Inside the world of public auctions

It is relatively easy to identify thesellers at the public IP auctionsorganised by Ocean Tomo between2006 and 2009, as well as theprices they achieved. But findingout who did the buying has beensignificantly harder – until now.

The real zombies exist solely on the books

Brands that are not used but keptalive in company books are notdead – they are wasted moneymakingopportunities.

Strategists of the world unite

Although there are many groups andorganisations that represent avariety of IP professionals andinterests, there is currently nothingout there that focuses specifically onIP strategy and strategists. However,that could be about to change.

Holding out for a miracle

It is clear that a single EUpatent and unitary court systemare essential if Europe is ever tobe a truly single market, letalone a dynamic centre ofworld-class innovation. But thatdoes not mean they areinevitable.

The best of the blog

Former chief IP execs at Microsoft, HP,IBM and Apple were asked to weigh in onpatent performance. What they had tosay may surprise you.

The momentary insider: observations from the legislature

Although a recent decision regardingGoogle AdWords issued by the Court ofJustice of the European Union was notgreat news for brand owners, it couldhave been a whole lot worse.