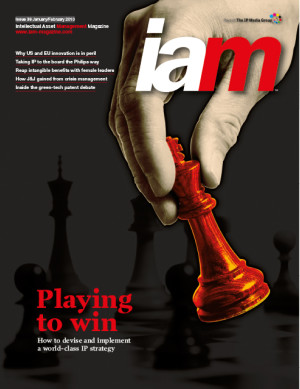 Patent analysis provides window into the future of three-dimensional innovation

Based on the level of innovative activity in the 3-D space, it appears we may soon be watching 3-D commercials on our flat-screen televisions and paging through 3-D memories of our children in photo albums, writes Jeremy Rosie, director of Expert Services, IP Solutions, Thomson Reuters
Jeremy Rosie

J&J, a Credo and a reputation

A case for adopting controlling dictionaries in the USPTO

Ambiguous language in patent applications can cause significant problems with examination and later with patent enforcement. The solution is to introduce easily accessible controlling dictionaries that will leave no one in any doubt as to what words mean
Manny Schecter, Diana Roberts and Alison Mortinger

A well-structured and properly managed IP strategy will play a pivotal part in any company’s overall success. Those that do the job best are well communicated, widely accepted throughout the organisation and, perhaps most important of all, widely practised
John M Raley and Patrick Sullivan

Why it has to be women

Equality of opportunity is not just a matter of improving corporate diversity profiles. The simple fact is that companies that employ a number of women in senior positions tend to do better on a range of key measures than those that do not
Judith Giordan

Taking IP into the boardroom

If IP is the integral corporate asset we believe it to be, why do so few C-suite executives engage with it? Maybe it’s because IP managers do not properly engage with them. At Philips, however, that is not the case. Here’s why
Ruud J Peters

IP rights on the line in Copenhagen

Intellectual property is proving to be a controversial issue in the climate change negotiations taking place in advance of a major UN conference to be held in Copenhagen in December, and compulsory licensing could be on the agenda. But is this a serious threat or just so much political posturing?

The future of innovation

Everyone has a stake in innovation. However, for the potential of innovators to be harnessed to maximum effect, the environment within which they currently work in many parts of the world has to change
Marshall Phelps

It’s all in the game

R&D games theory has led to a better understanding of how IP is leveraged in various industries. It is also a useful tool for those interested in exploring how patent issues impact on open innovation timeframes
Paul B Germeraad

After six years and 38 columns “IP investor” emerges with a new name and broader outlook. What does stock investing have to do with patents? Keep reading to find out
Bruce Berman

CIPO forumUnder the banner of competitiveness

Applying for both patent and utility model protection is still feasible under the new Chinese Patent Law, and in many situations it could make perfect sense
Nicholas Redfearn

The challenge for China

Although the facts and figures are impressive, China is not yet an IP superpower. But if regional and central authorities learn to take a back seat, it soon could be

The IAM blog currently has a regular readership of around 9,000 unique users, who visit the site an average of three times a month. In this new series, some of the blog’s most popular recent posts will be reproduced in the Insight section of IAM magazine, along with some of the responses that they generated.

More change in the USA

A special roundtable examining the latest developments in the United States reveals that it has been another year of big changes in the world’s most important patent marketplace
Douglas Cawley, Barry Schindler and Toni-Junell Herbert

The landscape of change in China

As China speeds towards becoming an innovation-based economy, foreign businesses have no choice but to engage with the Chinese IP system. However, uncertainties in the efficacy of that system mean that due diligence is more vital than ever for rights holders
Tim Smith and Luke Minford

Trying patent cases in US federal courts: telling the story behind the technology

Presenting patent cases is as much about how you tell it as what you tell. A compelling, well-rehearsed story about the obstacles an inventor has overcome to secure a patent is key to helping a judge and jury comprehend complex technical issues
Louis Genevie and Daniel Cooper

Is Japan a hostile environment for patents?

Despite low attorney fees, high damages and relatively fast trials, the number of patent cases being initiated in Japan is falling. Some commentators argue that Japanese patent litigation is actually antipatent, which may be affecting the number of cases filed
Masahiro Samejima

The role of the expert witness in calculating damages

The Federal Circuit Court of Appeals has set aside a US$358 million damages award in Lucent v Gateway, finding that the evidence was insufficient to support the jury’s verdict. The case provides some useful guidance on the role of expert witnesses in working out damages
Michael J Lennon

@IAM_magazine Deep dive into how the leading PTAB law firms have been hit by slump in IPRs https://t.co/LLUg3fCMXV https://t.co/5ulNFsX3Qi Read more