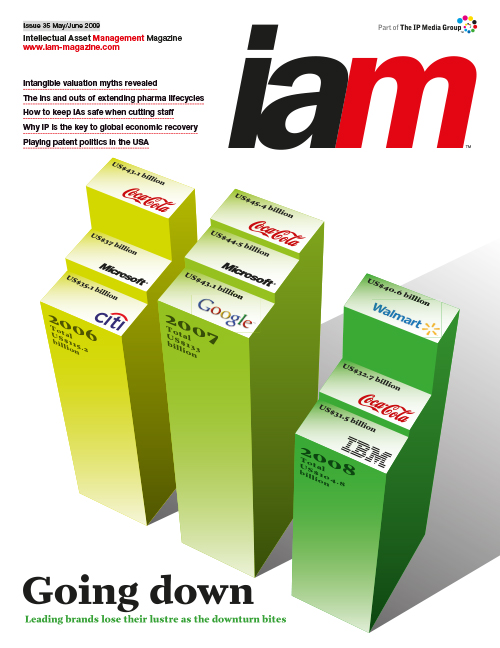 The BrandFinance Global 500® is
an annual survey of the world’s
most valuable brands. During 2008,
the combined value of the top 50
dipped markedly and a new name
took pole position

The world may need more intellectualcapital management expertise, butuniversities will need a stronger kickup the backside from industry to makeit happen

Why it makes sense to bet on IP now

In a late 2008 decision, which did notcite existing patent law, the US Courtof Appeals for the Federal Circuit mayhave changed patent litigation in 2009and beyond

CIPO forumThe power and the paucity: ICM supply and demand

Innovation plays a vital role in economicrecovery, but a shortfall of intellectualcapital management expertise in industrythreatens to dampen its impact

It is an unfortunate fact that thedownturn will mean manycompanies have to lay off staff.In order to ensure that this doesnot lead to the loss of importantintellectual assets, the processhas to be handled carefully

There are a number of commonassumptions that people makeabout valuing intangibles. Many ofthese are just plain wrong

The weakest link in corporate IAM

In many areas intellectual assetmanagement processes inside thebusiness community are workingwell. However, when it comes to IPthere are still a number of importantlessons to learn

How patent vulnerability impacts on valuation

The role of IP in promoting economic growth through innovation

It has never been more important tofoster the creation and exploitationof intellectual property rights. Theywill play a vital role in helping theworld through the current downturn

For what it’s worth

Before deciding to use secondarypatents to extend the lifecycle of apharmaceutical patent, it isimportant to work out whether doingso is actually worthwhile. This iswhere valuation comes into its own

Inside the fight over US patent reform

While many may argue that it neverreally went away, the patent reformdebate is now firmly back on theagenda in the US following thereintroduction to Congress oflegislative proposals for change

From outside agent to long-term IP partner

The hows and whys of software patent protection

Obtaining patent protection forsoftware can be challenging sincerequirements vary from jurisdictionto jurisdiction – as historical andprevailing trends in the UnitedStates, Europe and China bear out

The German Federal Court of Justiceis essentially in line with the EPOBoards of Appeal in their rulings onthe patentability of computerimplementedinventions. Both requirethat an invention have a technicalcharacter in order to be patentable

Patentable subject matter in the US: past, present and future

The landmark Bilski decision hasleft commentators divided as to thefate of business method andsoftware patents in the UnitedStates: some believe they will beharder to obtain and enforce, whileothers view the ruling asconfirmation of their viability

Stakeholders agree that strongerprotection is needed for softwareinventions in India, but the formthat protection should take –and the patentability of suchinventions themselves – are morecontentious issues

The Patent Reform Act 2009 isnow being discussed inCongress and could lead tosignificant changes to theAmerican patent regime.New personnel at the Court ofAppeals for the Federal Circuitmay well have the same effect

A special roundtable discussionfocusing on the brand creation andmanagement process

Innovate your way out