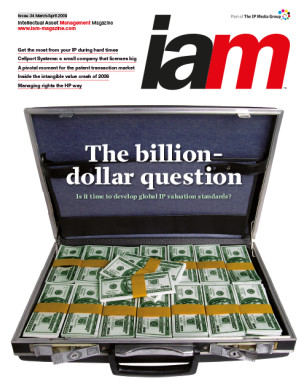 Standardising IP valuations: whether, what and how

Valuing IP is complex, with more than 50 different methods currently in use. Given the growing importance of IP to so many organisations, perhaps now is the time to re-think whether global valuation standards make sense

In today’s economic environment, it is essential for law firms, like most other businesses, to distinguish themselves from their competitors in order to maintain and grow market share, says Steve Kriston, director of North American sales for the Scientific business of Thomson Reuters

Cellport Systems has thrived as a small research-based business in a market dominated by the big boys. An innovative approach to patenting plays a fundamental role in a strategy that has created several billion-dollar revenue streams
Pat Kennedy

The patent transaction market at a crossroads

There has never been a better time to acquire high-quality patents at low prices. Companies and other entities should be taking advantage of this fact
Lewis Zaretzki and Kent Richardson

There are proven ways to reduce IP investment costs while also enhancing the value of rights portfolios. During an economic downturn, these come into their own
Bruce A Story and John Cronin

Hewlett-Packard has devoted significant time and resources to ensuring that its IP portfolio is aligned to the company’s overall strategic goals. An extract from a recently published book* about IP business models explains how
Joe Beyers and Bruce Berman

The reputation and intangible asset value crash of 2008

Over the last 12 to 18 months the percentage of listed company values that can be attributed to intangibles has fallen rapidly, to stand at under 50%. Serious rebuilding work is needed
Nir Kossovsky

To create maximum value from intellectual property rights, owners have to ensure that their IP management and business strategies are closely aligned
Eduardo M Carreras and Christopher M Arena

In one of its first considerations of dilution, the ECJ delivered a judgment that makes it a difficult concept for trademark owners to claim
Ellen Hughes-Jones and Andrew Bowler

The modern-day debate about IP is often described as polarised and ideological. Unfortunately, this may be too kind. Many views are best described as naïve and manipulative. The discourse on counterfeiting and piracy is a good case in point
Bowman J Heiden and Ulf Petrusson

How does your licence agreement address timely issues?

Licensing deals are negotiated and licensing agreements written in real time. A robust pro forma licence agreement can save hours of transaction time at critical points in a deal
Pamela L Cox

The Indian version of the Bayh-Dole Act

A bill that would allow governmentfunded academic institutions to patent their inventions has received a mixed reception. It should result in greater interaction between industry, academia and government, but some fear it does not protect the public interest
Manish Saurastri and Rahul Vartak

By implementing a sound and flexible IP management process, universities can spot the technologies most suitable for exploitation and give them a good start in life. For those that do so, there are rich rewards to be reaped
Tom Grek and Ben Goodger

The truth about business method patents

Business method patents are still alive and well in the United States. However, the Federal Circuit’s landmark Bilski decision is a reminder that they must meet the “machine-or-transformation” test, like any other process claim.
W Edward Ramage

Sometimes it’s best to look outside of the IP bubble

A background in IP is not a prerequisite for patent and trademark office bosses in most jurisdictions; it should not be in the United States either