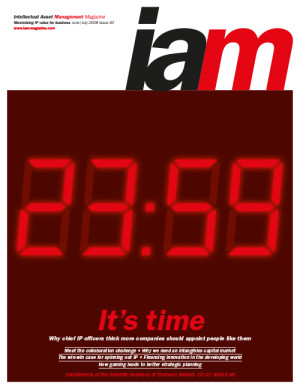 Fighting for a space in the C-suite

It is imperative that organisations know who is citing them and why. Such analysis can provide insight into competitor activity, identify potential partners, and help protect IP portfolios, writes Susan E Cullen, Consulting Practice Director at Thomson Reuters
Susan Cullen

Building a capital market for intangibles

Intangible assets represent an untapped source of capital for American companies and an unrecognised opportunity for investors. But creating robust capital markets for intangibles is challenging – a task made even more difficult by recent turmoil in the financial markets.

Spinning out for success

Although corporations worry that giving the green light to spinouts could lead to the departure of key technologists, the benefits of pursuing such a strategy are far greater than any potential downside.

How serious gaming can solve the patenting paradox

Although the majority of companies and research organisations are filing increasing numbers of patent applications, they are not realising the maximum value from them. Serious games are the best way to develop management skills and to solve the patenting paradox.

Open innovation is growing in popularity as an increasing number of companies seek to collaborate on research and product development. However, for the process to work, it is vital that all the IP angles are understood and acted upon.

Financing innovation in the developing world

Securitisation of IP rights can be a way to help innovators in the developing world access capital. Innovation can further be promoted by innovating finanicial services themselves.

There are several patent funds currently active in Germany. Unfortunately, the hype they have generated means there could be a painful hangover once the party is over.

Protecting against deception in standards-setting organisations

The recent CAFC decision in Rambus v FTC raises questions as to just how applicable US antitrust law is in the standards-setting process.

Is management obsolescence the next stage in the development of the intellectual property economy?

Digging below the surface often reveals that many strategic processes have little to do with the strategic direction that a business is taking. Is this true for patent strategy as well?

We can be pretty sure that Francis Gurry is as old as he says he is. That in itself is progress for the World Intellectual Property Organisation, the UN’s beleaguered IP agency of which the 57-year-old Australian will take leadership at the end of September. Unlike Kamil Idris, the man whom he succeeds, the professional past of WIPO’s director-general designate is fully transparent and very well known. There will be no surprise revelations once the reins of power have been handed over.

The Patent Reform Act has hit a brick wall in the US Congress and looks unlikely to be resurrected during 2008. This leaves the door open for reform by other routes – something that means US patent owners may live to regret their inability to find common cause.