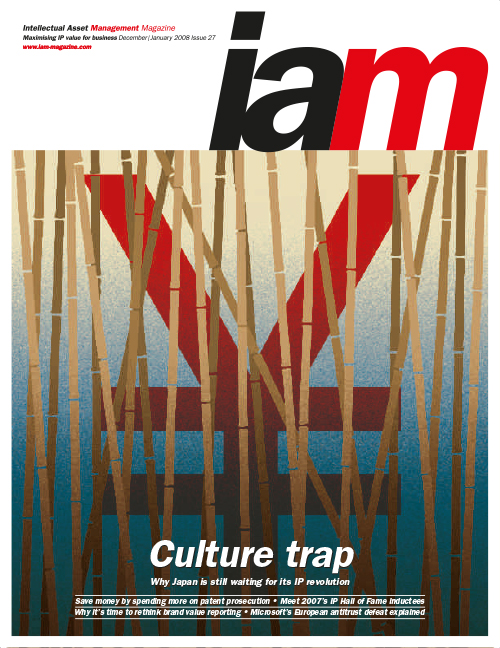 Japanese IP typhoon still not even a tropical storm

Despite a number of headline-grabbing IP litigations over the last several
years, involving some of Japan’s largest companies, the view that Japanese
corporations are drastically changing their IP culture is seriously overstated

Business roles in the knowledgeeconomy are not going to be whatthey once were. The question is:who will drive the change?

At the 11th hour – in fact, on theday before they were due to comeinto force – controversial newUSPTO rules on continuationpractice and claiming were blockedby a court in Virginia

IP rights could help the US find away out of current economicdifficulties. But only if a new classof stakeholder is recognised first

Should old acquaintance be forgot

There are people who claim thatintellectual property makes uparound 80% of many companies’values. They are wrong to do so

IP management – a question of perspectives

According to a survey of European patent attorneys working in-house and inprivate practice, the two groups have sharply different perspectives on manyaspects of IP management

The inductees into the IP Hall of Fame for 2007 have all helped to establishintellectual property as a cornerstone of the global economy. Over thefollowing pages they look back on their achievements and explore what mayhappen next as the IP world develops

It’s time to leave the 20th century behind

Current ways of reporting the value of brands provide investors with fewinsights. It is time to develop new methodologies

Microsoft has decided to throw in the towel and concede defeat in itsantitrust battle with the European Commission. Other IP owners would dowell to look carefully at what it all means to them

Getting less for more

Low-cost, volume-based patenting may seem attractive at first sight,but closer examination reveals it to be both a budgetary nonsense anda technology-protection folly

For over three decades,International Game Technology (IGT)has established itself as one of themost recognised slot-machine andvideo gaming machine company,garnering approximately two-thirds ofthe market and moving into the top10 in the Patent Board’s ConsumerElectronics Scorecard this year

Murky waters on the banks of Lake Geneva