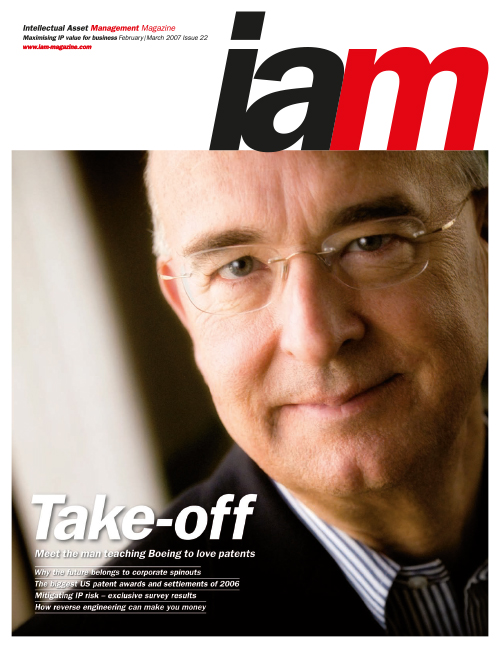 The man from Boeing

It may be the world’s biggest player in the aerospace industry, but despite patent-caused difficulties in its early years, Boeing has not always prioritised the systematic creation and exploitation of IP. Robert Gullette is the man charged with turning things around.

A keirestu approach to patents

Although many of those urging patent reform in the US say they want to increase competition and innovation, what they are proposing could, in fact, have the very opposite effect.

It is the forensic science that for many companies has played a key role in turning patents into revenue. And now reverse engineering is more sophisticated than it has ever been before.

Doing business with the US government

Although IP ownership can be hugely beneficial, it does bring with it risks of certain downsides, from assertions by patent trolls through to potential shareholder suits. A recent survey suggests that certain types of insurance could help to mitigate such risks

The changing face of due diligence

It has always been important to be sure that the IP you are acquiring is the IP you want. However, the growing number of ways in which rights can now be monetised means that due diligence is more vital than ever before.

Another arrow in the IP quiver

Instead of leaving unused and unwanted intellectual property rights to wither on the vine, companies should think carefully about whether they are suitable candidates to provide the launchpad for a corporate spinout

Patent values in the US, as determined by the top 25 litigation awards/settlements, took a tumble in 2006, dropping from US$5.1 million to US$3.1 million.

It is no secret that amicus filers are not always interested in the general cause of justice.

With their recent MedImmune v Genentechjudgment, the nineSupreme Court justices have changed the licensing landscape in the US

It was probably the biggest IP get-together in Europe since the INTA held its annual meeting in Amsterdam in 2003. And the pan-European IP Summit was dominated by talk of the continuing impasse in attempts to reform the continent’s patent system.

Gowers upsets the music industry but does the right thing

The much-heralded Gowers Report was not well received by the UK’s music industry. But the industry is wrong and Gowers is right.