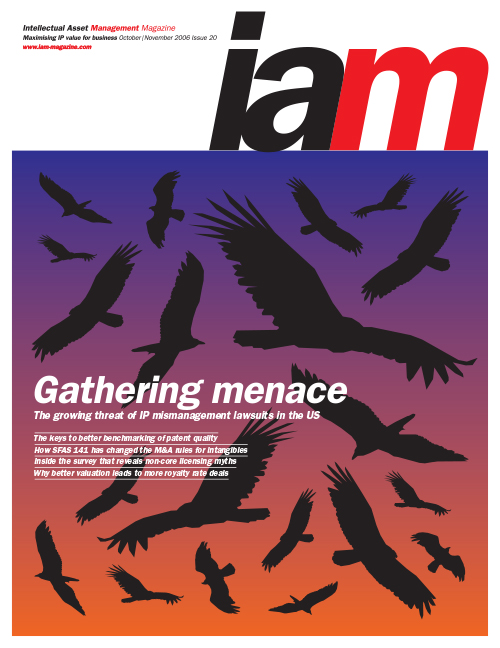 The US is still waiting for its first major IP-based shareholder suit; the
one that will change the way company boards view IP rights forever.
And with Sarbanes-Oxley now fully up and running and the SEC beginning
to take an interest, many predict the wait may soon be over

Because intellectual property is a legalright, in the end it only has value if thosethat own it are ready to go to court todefend what they have. A company that isprepared to stand by and watch othersinfringe its patents, trademarks, copyrightsor trade secrets will not be in business forlong. Certainly, its shareholders will veryquickly begin to ask questions.

The USPTO is the “ruling” party

Finding a patent attorney shouldnot be too difficult. Making sure youhave the right one, however, is aharder task

Ideas and wars of ideology

In the so-called War on Terror,intellectual property has a crucialpart to play. Whether the IPcommunity is doing enough,however, is open to debate

Outlawing broad patents on unusualinventions is a bad idea. It is morelikely to destroy innovation than fuel it

From breakdown to breakthrough

While negotiating parties can usually agree on the major elements in anylicensing deal, things get trickier when it comes to looking at the minutiae.To prevent negotiations breaking down, multi-faceted valuationmethodologies should be employed

SFAS 141 was issued five years ago in the US to change the way in whichacquiring companies value assets and view intangibles involved in an M&Adeal. In order to avoid future problems such companies would do well toensure that IP experts take part in the valuation process

The truth about non-core licensing

Off-industry and non-core patent licensing has often been held up as theIP industry’s Holy Grail. But recent research suggests that for most it isactually nothing more than myth and mirage

The path to progress for India’s booming IT sector

India’s IT industry is one of the country’s great success stories.But to take the next step forward, businesses operating in the sectorhave to come to terms with a series of IP management challenges

It has always been easy to measure the size of a patent portfolio.More complicated has been the task of working out its quality. Now, however,new statistical benchmarking methods are emerging which could makethings a whole lot simpler

Intellectual property due diligenceshould form part of the necessaryaudits undertaken before any M&Aactivity. However, it often isn’tconsidered until very late in theprocess, writes John Pryor of CPA

Money men hedge their bets at LES in New York

At this year’s meeting of the LES USA and Canada,the relationship between patents and finance was highon the agenda. And while the mainstream investmentcommunity remains wary of placing too much emphasison any kind of IP right, specialist investors arebeginning to emerge

Bridging the divide is key to a positive IP future

There has been a shortage ofdialogue between IP practitioners andowners on the one hand, andacademics on the other – often to thedetriment of both. A new EuropeanPatent Academy initiative aims tochange all that.