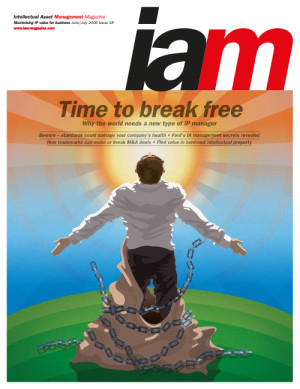 The clash of mindsets

In order to capture the full value of intellectual property, a new generation of IP professionals needs to arise: people who can think and act in an interdisciplinary way, and define value from a business, legal and technical perspective

The trials of Amgen

It is a company that has become used to major patent litigation. But Amgen’s latest battle could turn out to be the most significant yet, especially at the end of a period when acquisitions and the establishment of a venture fund have marked a change in strategy

Think twice before raising the standard

Although membership of a standards organisation may seem to be an attractive option, companies should always think carefully before they sign up as there can be significant downsides to participation

Intellectual asset sale in a bankruptcy

The prediction is that a growing number of US companies will be going bankrupt over the next few years. Many of them will own potentially valuable intellectual property rights

The role of trademarks in M&A

Towards a more inclusive patent world

The patent system needs to be rethought if it is to remain relevant in the 21st century. The people who take part in the process have to be drawn from a broad cross-section of interests because it is far too important to be left to the usual suspects

Ford Global Technologies needed an IAM system to help it manage its global portfolio of rights. Instead of developing one alone, the company got together with British American Tobacco. The results have been spectacular

An in-bound supplement in which correspondents report on recent developments in some of Asia’s most significant jurisdictions.

It is not just patent offices that are responsible for the issuance of poor quality patents; filers have to take their share of blame as well. And until they do, things are unlikely to get much better

Taking on the trolls

Venture capital funds have to be aware of the challenges posed by patent trolls. The good news is that the threat will not be so great in Europe

The Microsoft v European Commission competition case has been described as “the biggest encroachment on IP in European competition law history”. And it is not over yet

Bankrolling the winds of change

As we search for solutions to the current energy crisis, there are lessons to be learned from events at the turn of the 20th century

US Supreme Court hammers trolls but others could be caught too

The US Supreme Court’s decision in eBay v MercExchange has been widely hailed as a defeat for patent trolls. But it will also have potentially damaging consequences for others.

Patent auction fails to match hype but no-one is complaining

All the right people attended the first open auction of patents held in San Francisco in April. The problem was, not many of them ended up bidding. But next time it could be different