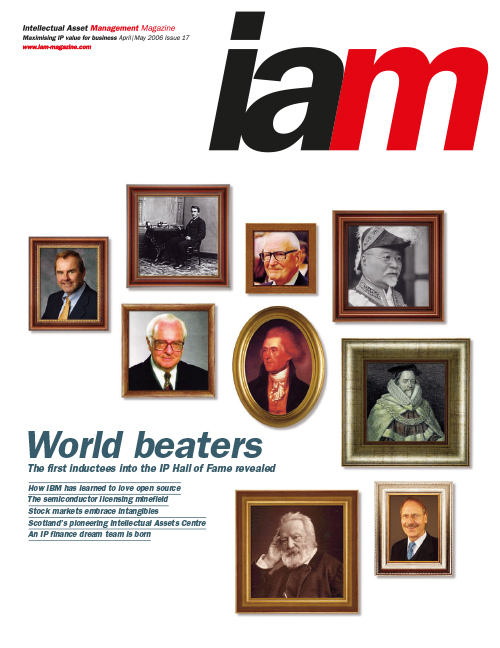 The IP Hall of Fame

The IP Hall of Fame is designed to honour those who have made an
outstanding contribution to the development of today’s IP system. The first
inductees were announced in February 2006

Venture capitalists need to know ifthe companies they are investing inpossess good patents. The questionis: what is a good patent?

It is common practice for designersto use their own names as brands.A recent preliminary decision fromthe European Court of Justiceshows that there can beconsiderable pitfalls in doing this

Many believe that because patentsare too readily obtained, the badones are gumming up the system anddestroying innovation. They are wrong

Troll wars – revenge of the inventor?

The Supreme Court’s decision in theupcoming eBay case could haveprofound consequences for the US IPsystem. Whether these will bewelcome is another matter

During most M&A transaction, IP isnot usually a primary consideration.But, writes Asa Le Fustec, it should be

The complexity of technology licences and cross-licences has increasedin many industries, but nowhere more so than in the highly competitivesemiconductor sector

IBM and open source do not seem the perfect match at first sight.But Big Blue makes no secret of its desire to get its fair share of the actionand is already making money from the Linux system. However, some doubtwhether this strategy can work in the long term

Scotland’s Intellectual Assets Centre is a unique organisation. Fundedby the Scottish Executive, the Centre’s remit is to help the nation’sbusinesses understand the importance of intellectual assets and toconsider them actively in strategic planning

As a pivotal figure in IBM’s reworking of its intellectual property strategy,Marshall Phelps is a worthy entrant into the IP Hall of Fame. He is nowhelping to rework Microsoft’s approach to patents

With banks and other financial institutions taking a much closer interest inintellectual property, IAM has put together a team of experts that will helpkeep readers updated on key developments

The power of intangible assets

It’s not all doom and gloom in China; someone please tell the USTR

If the USTR is to be believed, Chinaand IP rights just do not mix. But sucha simplified view does not reflect thereal situation.

AUTM members must look beyond the bottom line

North American universities have created and licensedout intellectual property that has done a great deal toenhance the lives of people around the world. But thatdoes not mean they could not be doing more